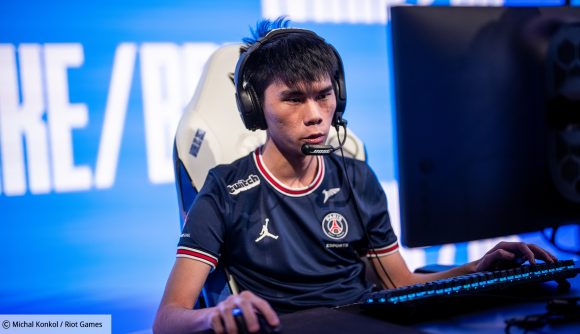 PSG Talon’s impressive semifinals run at the 2021 League of Legends Mid-Season Invitational set a lofty standard for the team heading into this year’s World Championship. Having been grouped up with reigning MSI champion Royal Never Give Up from the LPL, LEC third seed Fnatic, and LCK fourth seed Hanwha Life Esports, the team found itself surrounded by stiff competition. Sadly, it narrowly missed out on getting out of groups, finishing 3-3 in games.

With the unenviable task of taking on RNG’s Chen ‘GALA’ Wei, Hanwha Life’s Kim ‘Deft’ Hyuk-kyu, and initially Fnatic’s Elias ‘Upset’ Lipp before extenuating circumstances saw Louis ‘Bean’ Scmitz take his place, PSG Talon botlaner Wong ‘Unified’ Chun Kit tells The Loadout that he knew from the off that he would have to be on his A-game to go toe-to-toe with his opponents.

“From the moment that we knew the group draw, we knew that it would be a very tough group for us,” Unified says. “We felt that the other three opponents in our group were super strong – especially because these teams all had very strong mid and bot lanes.”

Unfortunately, things didn’t go as well as Unified perhaps hoped they would in lane. Having previously told Dexerto at the end of the second day of Group Stage play that he wasn’t particularly vibing with the Worlds meta, the PSG Talon botlaner struggled to make his mark, and would often find himself behind his opponent at 15 minutes.

THANK YOU PSG 🔴🔵 FAM 🙇‍♂️ for all the support!
Apologies for not being able to break our region's TOP 8 curse…

BUT
Your support this worlds has been amazing 👏
We will keep working hard to grow and develop😬 #WORLDS #PSG #ICICESTPARIS pic.twitter.com/q7P8rveF5B

Although PSG Talon’s Worlds run came to an early end, Unified says he has learned a lot from other botlaners at the tournament – particularly Deft. “He really is a veteran with a lot of experience in these tournaments,” he says. “There are so many details in how he lanes and how he tries to punish opponents in the early game (that I have learned from).”

One player Unified unfortunately didn’t get to glean insight from is Upset. With both players having been unable to represent their teams in Iceland at some point this year – Unified missed out on MSI due to a collapsed lung – the player says that he feels sorry for Upset, and wishes he had a chance to play against the Fnatic man “because he’s the top botlaner in Europe this year.”

While Unified didn’t quite get to have his moment against a full-strength Fnatic on stage, he has made some fond memories during his time at this year’s tournament – most notably PSG Talon’s victory against HLE. “A long time ago we scrimmed against them and our win rate was around 30%,” he says, “so to be able to get a win against them on this very big stage makes me very happy.”

Now an onlooker as the rest of the tournament plays out, Unified doesn’t have a firm favourite to win it all, though there are three teams that stand out to him: EDward Gaming, DWG KIA, and T1, due to their “really tight gameplay” and the quality of their rosters. We’ll just have to see if one of those teams can take it all when the 2021 Worlds Knockout Stage kicks off with T1 vs HLE on October 22.