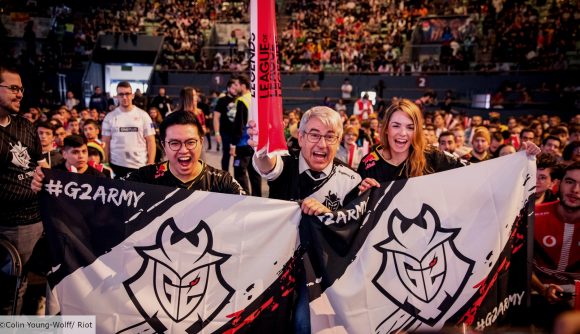 It was a clash between two titans of competitive League of Legends. One had the support of all of Europe, the other all of South Korea. G2 Esports vs SK Telecom felt like a final, even if it wasn’t one.

There was so much hype and interest in this World Championships semifinal that it drew in a huge audience across the globe and attracted the highest peak audience we’ve ever seen for an esports broadcast. According to escharts.com, it smashed the record set by SK Telecom vs Splyce in the quarter finals with a peak audience of just under four million viewers; 3,985,787, to be precise.

What’s even more astounding is that this number only takes into consideration numbers provided from Twitch and YouTube, and doesn’t contain the figures from other streaming sites. This includes the main sites in China, where there is a huge League of Legends audience. It’s almost certain that the match did break the four million barrier.

according to EsportsCharts G2’s victory over SKT in the LoL Worlds semifinals today peaked at just under FOUR MILLION concurrent viewers (3,985,787) across Twitch and YouTube!

The other semifinal between defending champions Invictus and FunPlus Phoenix saw a peak of just over two million viewers across Twitch and YouTube, but this all-Chinese matchup will probably have a viewership close to G2 vs SKT if the massive audience back home could be measured.

This sets an enormous precedent for the final between G2 and FunPlus Phoenix, as it is likely to become the third fixture this tournament to break the record. The most watched non-Worlds event was the final round of the Fortnite World Cup Solos event this summer.

It is the first time in the final of Worlds for both of the teams and a G2 victory would result in the first European winner since the inaugural Worlds in 2011. With such an exciting final on the line and a real East vs West storyline on the cards, just how many viewers will this match draw in? Only time will tell.