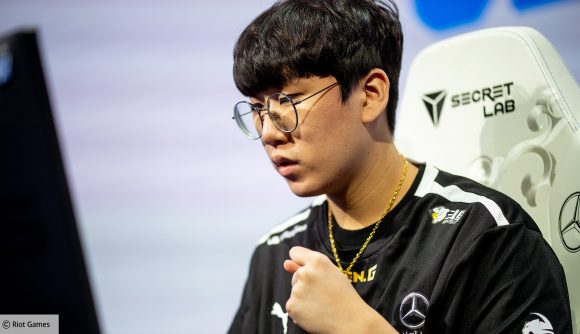 Today’s League of Legends 2021 World Championship tie between Gen.G and Team Liquid was significant for a few reasons. Group D had found itself in a four-way tie at the end of day two, and a win for either side today would put them in an advantageous position heading into the second round robin. It was also the first time Amumu support had been picked up during the Group Stage, indicating that there’s still plenty of life in the Sad Mummy in this meta.

The final reason is much more personal, particularly for Gen.G botlaner Park ‘Ruler’ Jae-hyuk and Team Liquid support Jo ‘CoreJJ’ Yong-in who once lifted the Worlds trophy together as part of Samsung Galaxy’s victorious 2017 roster. Today represented the first time the two would meet on the Rift since CoreJJ left Korea for the North American giants in November 2018.

Fortunately for Ruler, it was his Gen.G side which emerged victorious from what was a bloody affair. During a scrum interview at the end of the game, we asked Ruler what it was like to lane against his former support, and it was difficult for the player to mask his disappointment that the current bot lane meta isn’t hinged on those straight up 2v2s.

“The current bot lane meta is not about fighting back and forth through the laning phase,” Ruler says, “but if that was the meta then I would have smashed them.” Fighting words.

2-1:@GenG pick up an important win as they take down @TeamLiquidLoL! #Worlds2021 pic.twitter.com/aettpuvvHw

We also asked Ruler if he had a message for CoreJJ, to which he made it crystal clear that his intention is to dominate the Team Liquid bot lane in the next round of the Group Stage. “I still have one more game to play against them, so next time I will make sure that I clap them,” he asserts.

Although the Worlds meta might not necessitate those 2v2 kill lanes right now, it’s clear that Ruler wants to ensure his former comrade suffers at his hands. You’ll be able to see if Ruler can make good on his words when Gen.G takes on Team Liquid once more on October 18.