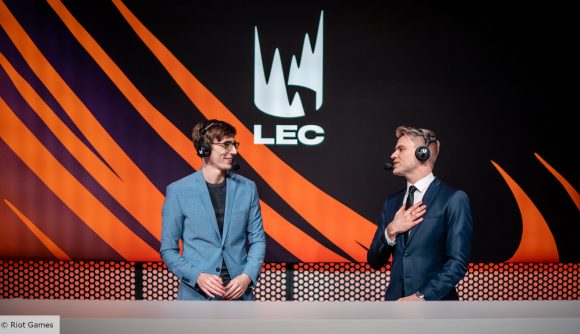 Mystery always shrouds the finals of the League of Legends World Championship. While the two teams, DAMWON and Suning, have secured their spot, little is known about what the opening ceremony will look like, what will happen in the build up, and who will be lending their voices to the drama of it all. Now though, we finally have an answer to one of those questions.

Just before the start of the LoL Worlds preview press conference, Trevor ‘Quickshot’ Henry confirmed that he and Andy ‘Vedius’ Day will be casting the historic finals. While this is Quickshot’s third Worlds finals cast (and second in a row), this will be Vedius’ first, so he’s no doubt feeling the pressure right now.

“So excited that my third #Worlds2020 finals cast will be alongside someone I’ve watched grow so much over the last three years,” Quickshot says on Twitter. “We will aim to live up to the expectations you have for a finals cast and deliver the best possible experience for fans around the world.”

While this is clearly an exiting moment for the two LEC casters, the decision to only use two casters this year has stumped many. For the last five years, Worlds finals have had tricasts to allow casters to bounce off one another.

Congratulations Andrew! I think you are overdue for a World Final, I told Riot it should have been you last year when I was told I was doing it, so I’m overjoyed that you’re getting your opportunity this year.

Riot Games hasn’t explained why it’s opted for a dual cast over a tricast, but it’s likely that the rules and regulations surrounding the ongoing global pandemic has had an effect here. This year’s semi-finals only had two casters too.

Regardless, many in the community – especially fans of the LEC – are happy to see this pairing get the opportunity to shine in the finals.