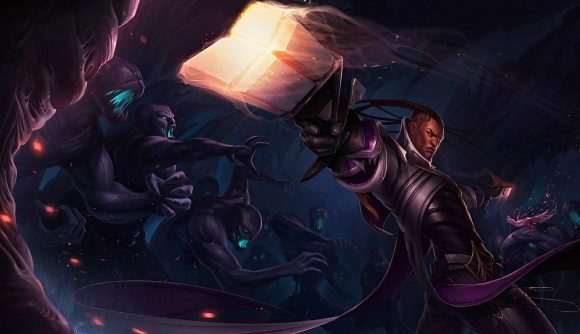 With the curtain falling on DAMWON Gaming’s victory in Shanghai, we now enter a time of reflection on a League of Legends World Championship that was extremely unique for a number of reasons.

One interesting aspect that is always looked into by fans is the meta, and more specifically, which champions dominated it. Well at this Worlds, from the very first play-in match right through to the final, there was one champion that teams did not fancy going up against: Lucian.

As we reported earlier in the tournament, Lucian was on course to become the most banned champion at Worlds 2020 – and by Jove he’s only gone and done it. Across the 114 games played in Shanghai, Lucian was banned away in 78 of them. That’s a ban rate of just under 70% for the entire tournament. The anti-Lucian sentiment grew as the tournament progressed, with the Purifier being banned far more frequently in the Worlds main event than in the play-ins.

Not far behind Lucian for total bans at Worlds was Nidalee, who was banned in 71 of the 114 matches. Ornn comes in third, with 62 bans across the tournament.

On the other end of the spectrum, one champion stands out as the ultimate ‘safe pick’ of Worlds 2020. By a considerable margin, Graves was the most played champion in Shanghai, with junglers of all abilities and from all regions wanting to run the Outlaw. He was picked on 69 occasions, meaning Graves featured in well over half of matches at Worlds.

Graves was the favoured pick for 2020 MVP Kim ‘Canyon’ Geon-bu, who played him on 11 occasions en route to becoming world champion with DAMWON Gaming.

The @oppo MVP of the #Worlds2020 Final: Canyon! pic.twitter.com/qxQeq6Dz3P

Senna, who was played 46 times, was the second most picked champion, while Jhin comes third with 43 games played.

There was only one champion at Worlds 2020 to be picked more than once and still get a 100% win rate, and it was all thanks to DAMWON’s Jang ‘Nuguri’ Ha-gwon. The toplaner’s four games with Kennen in Shanghai all resulted in a win, and Nuguri loves the champion so much he’s considering him as his pick for a Worlds skin.

While there’s always going to be strong champions in a game like League of Legends, at least this year’s meta didn’t feature a completely broken champion. Remember when Pantheon became the most banned champion in LoL Worlds history last year? Scary.