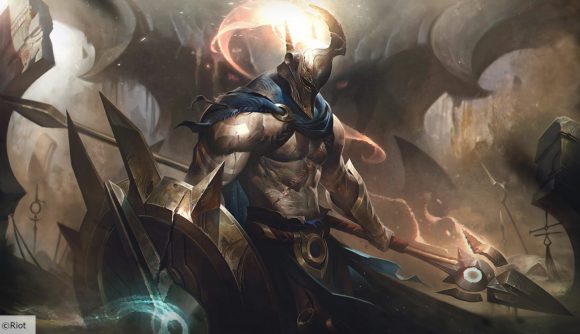 Throughout the last month of Worlds action, we here at The Loadout have been keeping a particularly close eye on one League of Legends champion: Pantheon.

Following the conclusion of Worlds 2019 on Sunday it became official that Pantheon is now the most banned champion in League of Legends history, after being picked in just one of the 120 games played at Worlds from the beginning of the play-ins to the final. The single game Pantheon was picked for came in the play-ins when MEGA Esports took on Lowkey Esports. According to statistics from GoL.gg, all 119 of the champion’s bans (42 in the play-ins, 77 in the main event) were phase one bans on the red side, showing just how daunting the prospect of facing Pantheon was to teams at Worlds.

The second-most banned champion at Worlds 2019 was Qiyana, who was banned on 86 occasions throughout the whole tournament. We did get to see a fair bit of Qiyana action though as she was picked 23 times.

Fans at the AccorHotels Arena in Paris were at least given some Pantheon action at the final, courtesy of business development manager for the LEC, Romain Bigeard, whose cosplay of the champion had a few appropriately French twists.

The only other champions that have come close to being as hated as Pantheon in the past are Gangplank at Worlds 2015 (banned 69 times but was picked on four occasions) and Kalista in 2017. Like Pantheon, Kalista had a 100% ban rate at the main event, but was picked on five occasions during the play-ins.

The blanket fear of the spear-wielding gladiator from every single team at Worlds, no matter their region or play style, proves just how strong Pantheon is in League, particularly in the early stages of a game.

Pantheon’s record will likely stand for a while, as the only way to beat it would be to achieve a true 100% ban rate throughout every stage of the competition.