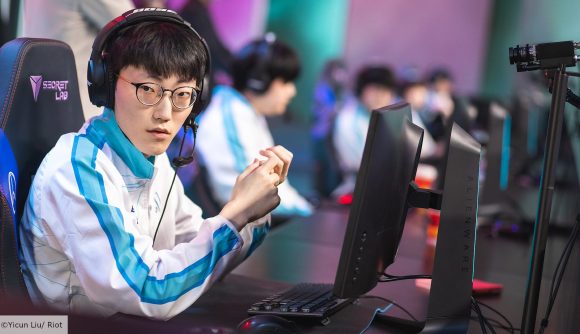 DAMWON Gaming toplaner Jang ‘Nuguri’ Ha-gwon has revealed which League of Legends champion he’d consider giving a skin to if his team wins Worlds on Saturday.

The LCK champion heads into the grand final of LoL Worlds 2020 as firm favourites to beat Suning, despite the LPL side beating its league’s second and first seeds to get there. Nuguri has been one of DAMWON’s standout performers and the 21-year-old appears to already have a frontrunner when it comes to Worlds winners skins. Speaking to Travis Gafford, Nuguri claims he hasn’t decided 100 percent, but that it would be nice to give a champion that relates to his in-game name a skin: Kennen.

“We have to win in order to really think about that so I haven’t thought that deep into it,” admits Nuguri through a translator. “But I did think “what if?” and have been thinking about it just a little bit. So, since my name is Nuguri, which means raccoon [in Korean] I’ve imagined that it’d be cute to have Kennen as my pick, which I’m a little embarrassed about!”

While many Worlds winners usually opt for champions that reflect their playstyle or were a common pick in that season or tournament, Nuguri admits he hasn’t really found himself a signature champion this season as he’s played a wide range of champions in top lane.

His translated explanation starts at: 1:23 pic.twitter.com/UneG8M1MLh

Also, Kennen is currently his joint-most picked champion at Worlds so far and is tied with Ornn with three picks each.

Nuguri admits his mind could be changed, but that if he was asked right now, Kennen would get a Worlds winners skin.

This would, unsurprisingly, be Kennen’s first Worlds skin. The fuzzy little raccoon ninja hardly has the mighty, powerful, or enchanting aesthetic you’d associate with a world champion. Then again, Samsung Galaxy’s Lee ‘CuVee’ Seong-jin got Gnar a Worlds skin, so why not Kennen, eh?