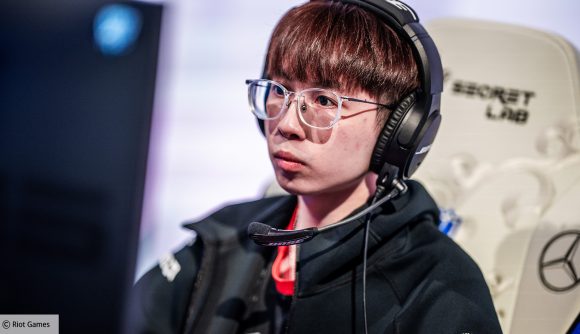 Ahead of Beyond Gaming’s crucial tie against Hanwha Life Esports, Riot Games has announced that the team’s midlaner, Chien ‘Maoan’ Mao-An has been suspended from competitive play for the rest of the 2021 League of Legends World Championship. The news follows earlier reports that the player had been feeding drafting information to a friend.

According to the competitive ruling, Riot says it has obtained “definitive evidence” of the aforementioned act, with Maoan’s transgression violating “Rule 9.3 of the 2021 World Championship Ruleset, which prohibits association with gambling.” Although the ruling doesn’t confirm exactly what information had allegedly been shared by Maoan, Riot states it was done so “for the purposes of wagering on today’s match” against Galatasaray Esports.

Not only will Maoan no longer be a part of LoL Worlds, but he could very well face further sanctions “following a full investigation”. PCS caster and host Jenny ‘Reirachu’ Lee earlier tweeted about the situation, stating that Beyond Gaming’s owner, Xue ‘DinTer’ Hong-Wei, had “turned his stream on earlier to say he was going to fire Maoan,” so it looks like the player’s time with the team is well and truly up, regardless of the outcome of Riot’s investigation.

Reirachu later posted a full summary of what had apparently transpired in the lead up to Riot’s competitive ruling, which you can check out below.

4. Dinter says Maoan confirmed he gave info abt champ picks for betting. Dinter also says BYG submitted this to Riot and are waiting on Riot's ruling on whether Maoan can play tmr's match (BYG have no mid sub). Dinter then made his stream VOD private [2/4]

there's also a rumour that someone else besides Maoan is involved in leaking PB. Also Dinter thinks the original leaker did so because Maoan said "Sylas and Orianna" and neither of them were picked today so they probably lost money and were mad…

With Maoan suspended, and Beyond Gaming without a natural replacement in the mid lane, the team will most likely be looking to substitute toplaner Hsieh ‘PK’ Yu-Ting to pick up the slack in tomorrow’s match against Hanwha Life Esports. The team reached the final Qualification Round of the Worlds Play-Ins after completing a reverse sweep against Galatasaray Esports in today’s series.