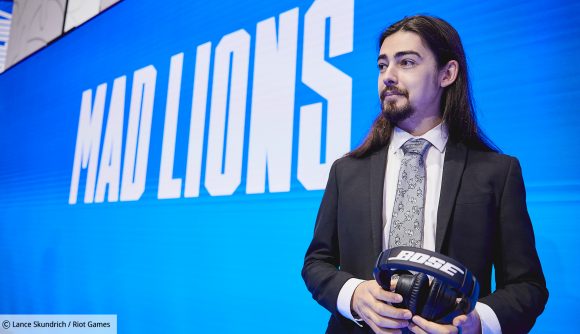 Yesterday’s dramatic conclusion to the League of Legends 2021 World Championship Group Stage saw the LCK’s Gen.G top Group D, while the LEC’s MAD Lions took second place. Due to a four-way tie and some incredibly tense games, the day represented a massive test for each team’s mental fortitude and stamina.

For MAD Lions, despite taking an early loss to Gen.G at the start of the day, the team’s mental was once again unshakeable – a trait we saw earlier in the year during its 2021 LEC Spring Playoffs Finals reverse sweep against Rogue. Although there were frustrations behind the scens following the first loss to Gen.G, head coach James ‘Mac’ MacCormack says the players were able to successfully balance that against the knowledge that other parts of their game were going well.

“The first thing I said to the players [after the first Gen.G game] was ‘okay, we played well, we didn’t play quite well enough, but it was close,’” Mac tells The Loadout during a scrum interview. “‘But we fixed a lot of our issues from week one – we’re playing way, way, way better today. If you guys play like this in the rest of the games, then we’re going to win them all – against Team Liquid and LNG you’re going to win if you play like this for sure. Just focus on what’s under your control.’”

Of course, at that point, MAD’s Knockout Stage hopes relied on a number of results elsewhere in the group going its way. Fortunately, Team Liquid’s victory over LNG in the second game of the day kept the LEC side in contention.

According to Mac, this was “a big, lucky break” mentally for the players, as they didn’t have to dwell on the bleakness of their situation for too long. With a spot in the Knockout Stage still a real possibility, MAD was able to win the return fixture against Team Liquid, before doing the same against LNG.

While Team Liquid eventually dropped out to Gen.G during the tiebreaker, MAD navigated its way past LNG in an absolute thriller of a game, leaving the two victorious teams to duke it out for the top seed in the group. Unfortunately for MAD, it couldn’t topple the Korean side.

Coming out of its group as the second seed, MAD was drawn against DWG KIA – the team that knocked it out in the semifinals of the 2021 Mid-Season Invitational back in May, and is the defending Worlds champion. With the stage set for Europe’s top team to take on Korea’s once again in Iceland, Mac is relishing the challenge.

“I’m really excited to play against [DWG KIA],” Mac says. “I think it’s really poetic, and really cool for the narrative of ‘us versus them’ again.” For Mac, the tie represents an opportunity to show the LCK side just how much his team has improved since MSI after what he admits was a pretty one-sided affair. 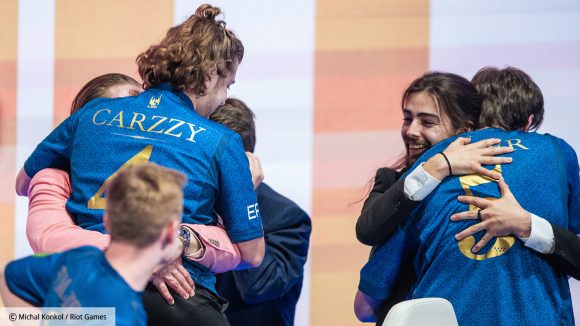 “Even though it [the MSI semifinal] went to five games – I definitely felt like it was quite one-sided,” Mac says. “It was a Herculean effort for us to win games against them. But when they were ahead, the games ended quite quickly. I think you could really see the quality of the team in that sense.”

For Mac, personally, it also presents an opportunity for him to redeem himself from his own mistakes, as he once again goes toe-to-toe with DWG KIA coach Kim ‘KkOma’ Jeong-gyun – the first ceremonious recipient of Mac’s now famous gifted ties.

“I think that I messed up a lot in game five’s draft [at MSI],” Mac says. “I think we could have won game five’s draft really hard if I had been more willing to stick to the courage of my convictions. So I’m looking forward to showing that.”

When asked if he had a message for KkOma, Mac kept his cards close to his chest. “Oh, I was actually planning on writing him a cheeky letter,” he says. Throughout the year we’ve seen just how much respect exists between the two coaches – though only one will emerge victorious when MAD Lions take on DWG KIA on October 24.