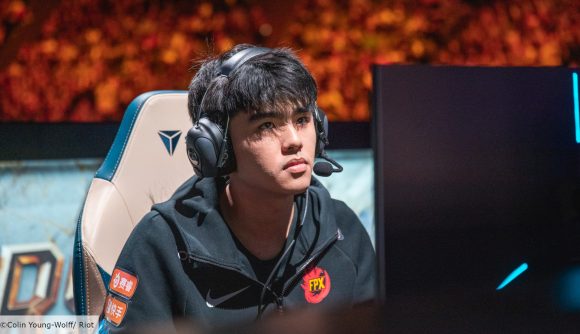 There was a lot to take away from FunPlus Phoenix’s unpredictably dominant display against G2.

However, one thing that may have gone unnoticed during the aftermath of the one-sided final is that the team’s AD carry, Lin ‘Lwx’ Wei-Xiang, became the first player in League of Legends Worlds history to go the entire final without a death, according to LoL Esports Stats. Although most of the attention was focused towards MVP Gao ‘Tian’ Tian-Liang and the incredible storyline of Kim ‘Doinb’ Tae-sang, Lwx put in a record-breaking performance and became the first ever Worlds finalist to completely avoid a death.

Across the three games, Lwx went 21/0/14, which is still a remarkable KDA even if G2 were far from their best. There was almost two of the FPX players who would have broken this record, as up until the last few seconds of game three toplaner Kim ‘Gimgoon’ Han-saem was also deathless, but on joining the push for G2’s nexus in the final game he was slain by Luka ‘Perkz’ Perkovic, leaving him 10/1/22 for the finals.

Gimgoon had 0 Deaths until the last 3 seconds of Game 3.

FunPlus Phoenix’s dominant performance will go down as one of the most one-sided finals in Worlds history, but the faultlessness of the likes of Lwx is what really impressed.

However, during his interview immediately after FPX’s victory, Lwx became the pantomime villain inside the AccorHotels Arena in Paris after playing saying: “Today, I don’t think it’s because we performed especially well, it’s because our opponents didn’t really perform.”