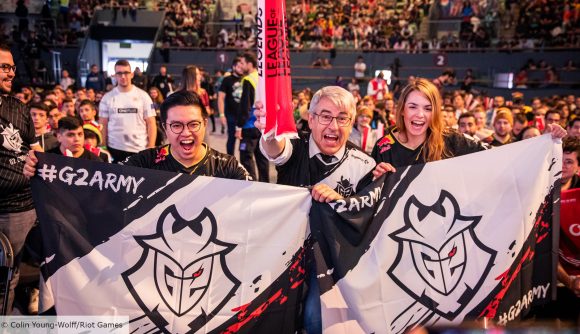 For the League of Legends World Championship semi-final between G2 Esports and SK Telecom T1, the old cliche was true: It could’ve gone either way. It ended 3-1 to G2, but the four games they played were some of the most hotly contested not just at Worlds 2019, but in League of Legends history.

Not only has a European team made the World Championship finals for the second year in a row, it’s also Rasmus ‘Caps’ Winther’s second appearance. He’s up against FunPlus Phoenix’s Kim ‘Doinb’ Tae-sand, and from the outside, it’s like they’re two sides of the same coin.

“Doinb is a very innovative player,” Caps says after the semi-final victory. “He likes to play weird champions and so do I. He always seems to have a lot of fun on stage, when I see him he’s always smiling.” Much like G2’s players, who even in defeat can often see the funny side of things.

“Looking at the semi finals, Rookie is a really strong mid laner, same for Faker. Me and Doinb are more crazy. Not as solid, but we think more outside the box, like Doing crazy things to bring us back in the game or get a lead. I don’t think I’ve played against a team like FPX, that will play the crazy stuff we will.”

After beating Lee ‘Faker’ Sang-hyeok and SKT twice in one year at major tournaments, Caps can surely be considered one of the best players in the world. However, he’s not allowing his ego to get too big just yet.

“A lot of mid laners are really strong,” he says. “Mid lane is the strongest role, so there’s a lot of strong players. There’s a lot of players on my level and stronger. I just have to prove myself. Winning worlds would be a start to that.”

But overall, the G2 players are confident in their abilities going up against FPX in the final – even Mihael ‘Mikyx’ Mehle, who hasn’t been at his strongest at Worlds up until this point.

“I would say I played pretty bad for the whole tournament except this series,” he says. “Liu ‘Crisp’ Qing-song was really consistent, I would put him above me… But I know I can match up well against him. This series today gave me a lot of confidence that I can play well.”

While Mikyx is quietly confident, Martin ‘Wunder’ Nordahl is overtly so, and brought some of the trash talk that G2 have become known for.

“I can say for sure today was the real final,” he says, referring to the match against SKT. “FPX will get the biggest reality check next week. They think we are bad but our wrath will be swift.”

SKT was a big test for G2. Many will say that FPX is not up to the same standard, but when it comes down to that final hurdle on the biggest stage of them all, will G2 be able to live up to the hype?

Matt has been writing about gaming and esports since 2012 for sites such as IGN, PC Gamer, Mail Online, and more, but his love of the industry goes back much further than that.