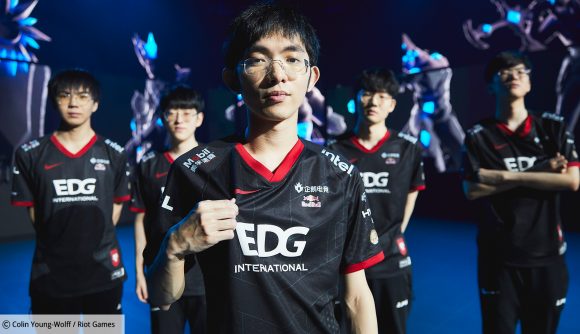 The 2021 League of Legends World Championship today crowned a new champion. After a gripping five-game series, it was the LPL’s Edward Gaming which took home the glory, having beaten reigning champion DWG KIA 3-2 in games.

Worlds may have only just come to its thrilling conclusion, but during the post-finals press conference the EDG players made it clear that they’ve already been thinking about the champions they’d love to get their own personal Worlds winners skin for. Every year, each player from the first place team is given their own unique champion skin. The skins are traditionally themed around the team in some capacity, so this year’s skins will be tricked out with EDG’s own flavour.

Li ‘Flandre’ Xuan-Jun, Zhao ‘Jiejie’ Li-Jie, Lee ‘Scout’ Ye-chan, Park ‘Viper’ Do-hyeon, and Tian ‘Meiko’ Ye will each be able to pick a single champion that represents them best on the Rift to receive a skin, immortalising their achievement.

But which champions do the EDG players want to flex on their opponents in style with next season? By the looks of things, they aren’t 100% settled on their final champion just yet.

Here’s what each player had to say during the winner’s press conference when asked which champion they would pick for a Worlds skin.

With a great selection of champions to choose from, we can’t wait to see who each player chooses. But please, Meiko, not Yuumi – anything but Yuumi.