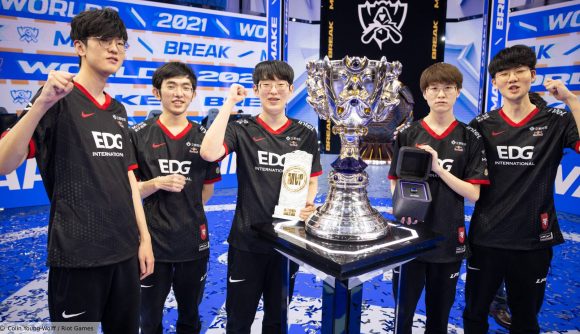 Edward Gaming usurped DWG KIA to sit upon the League of Legends World Championship throne at this years’ tournament. With the players snagging themselves the lion’s share of LoL Worlds’ $2,225,000 prize pool, as well as some snazzy white gold and sapphire Worlds rings each, the EDG squad certainly hasn’t done badly for itself coming out of the event – but it gets better.

According to Sports Business Journal’s Hongyu Chen, EDG founder Edward Zhu – who also owns investment firm Zhujiang Investment Holdings – has awarded each player a condo in Guangzhou. Located in the city’s rapidly-developing Zhujiang Future City area, each property is said to be valued at over ￥1 million RMB (roughly $156,000 USD).

Chen says that Zhu had originally promised the properties to the team in the lead up to its finals clash with DWG KIA, on the proviso that it brought home the Summoner’s Cup to China. It looks like the players will now have a new pad to display their winners medals in.

With that said, there may be a small snag for EDG’s Korean duo, Lee ‘Scout’ Ye-chan and Park ‘Viper’ Do-hyeon, who may not be able to receive their properties as they hold foreign status. Chen notes that, although the organisation’s top dogs are trying to push their reward through, the players will receive equal compensation another way if their attempt fails.

A Worlds title that was MANY years in the making, @EDG_Edward finally got to lift the Summoner's Cup after an incredible victory at #Worlds2021! 🏆

Their journey here wasn't easy, and this was EDG's Road to Championships! pic.twitter.com/9Y9od0Z77Y

The Summoner’s Cup, winner’s medals, shiny new rings, and a whole house each? Not a bad haul for the EDG players to say the least.