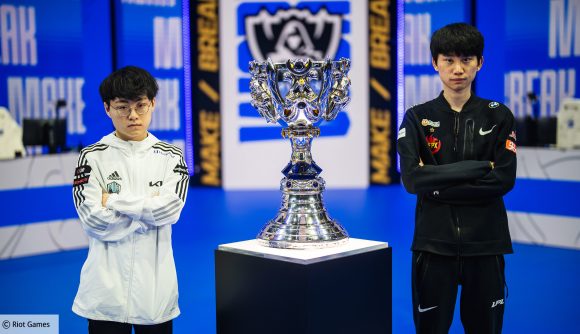 FunPlus Phoenix’s League of Legends Worlds 2021 campaign got off to a rough start, with the 2019 world champion side being handed an L in its opening match against reigning champion DWG KIA. However, with FunPlus Phoenix still being favoured by many to go on and win the whole tournament, there is a long road ahead for the LPL side.

During champion select, FPX locked in Nautilus – one of the many ‘dark technologies’ attributed to midlaner Kim ‘Doinb’ Tae-sang, as the player has been known to play the support-oriented pick in the midlane. It is this creativity in Doinb’s picks has drawn admiration from players across the globe.

Take RED Canids’ midlaner, Daniel ‘Grevthar’ Xavier, for example. The Brazilian player told The Loadout during a Worlds Play-Ins press conference that his love for playing Kled mid comes directly from watching Doinb pilot the Cantankerous Cavalier. Meanwhile Fnatic’s Yasin ‘Nisqy’ Dinçer previously told The Loadout during the LEC 2021 Summer Playoffs that he often watches Doinb’s VoDs, and has a great deal of respect for the player.

When asked at the end of today’s game what he makes of having such an influence on his contemporaries, Doinb tells The Loadout that he “really appreciates that so many people have those kinds of statements” for him.

However, the Korean also notes that this influence goes both ways and says that he’s “really learned a lot from other pro players” over the past year after FPX failed to qualify for Worlds 2020.

While Doinb says he wants to continue to learn from his peers, he hopes to carry on inspiring the League of Legends community in return. “I would like to bring more [influence] to all of you,” he says.

Doinb’s next opportunity to dazzle on the Rift will be against Cloud9 as FPX looks to bounce back from its opening day defeat.