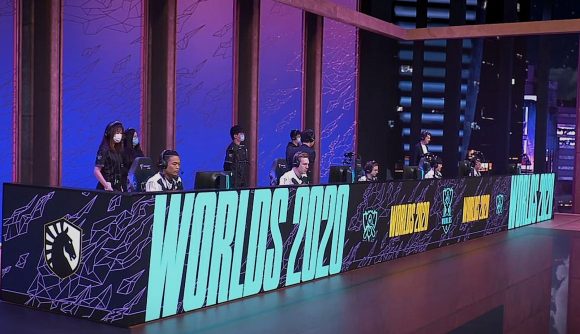 With most League of Legends esports fans starved of LAN action in 2020, this year’s World Championship in Shanghai has arguably been the most anticipated ever.

Today the tournament got underway with the first round of the play-ins. Hundreds of thousands piled in for the first game between the victorious MAD Lions and the defeated INTZ, but it was the final two games of the day that smashed records out of the park and showed just how big this year’s Worlds is shaping up to be.

In the PSG Talon vs LGD Gaming Group B match, which produced a shock result, the peak viewership shot past one million, an exceptional milestone for a play-in match. This was then bettered as the two titans of the LEC and LCS clashed in Group A. According to Esports Charts Pro, 1.15 million viewers were watching MAD Lions taste defeat at the hands of Team Liquid across all platforms.

This impressive viewership for the tournament’s first day of action also excludes data from viewers in China, meaning the LGD Gaming match was likely watched by a much larger audience than the numbers suggest.

#Worlds2020 Viewership for the opening day of play-ins (per @EsportsCharts)

Last year’s LoL Worlds broke the record for the highest peak viewership for an esports tournament when just shy of four million people tuned in for the semifinal between G2 and SK Telecom (now T1). While T1 and its star player Lee ‘Faker’ Sang-hyeok may have missed out on this year’s Worlds, the signs are pointing towards another record-breaking year for the tournament.