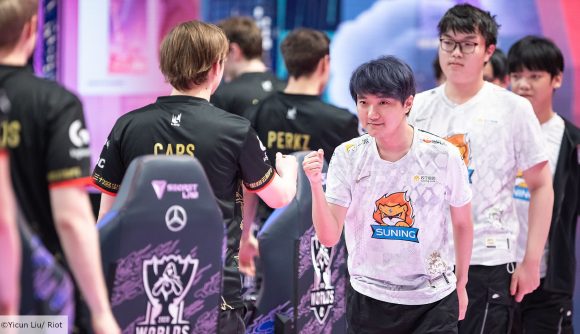 Suning has become the second team to book a spot in the semi-finals of Worlds 2020 after bouncing back to beat fellow Chinese team JD Gaming 3-1.

Despite coming into the tournament as the third seed from the LPL, Suning has shown some impressive displays so far, topping Group A ahead of LEC top seeds G2. Despite the majority predicting a JD Gaming victory, Suning recovered from a game one defeat to progress. One of the stand out plays came towards the end of game two, in which Suning’s 19-year-old AD carry Tang ‘huanfeng’ Huan-Feng snuck behind enemy lines and began terrorising JD Gaming from within its own base, popping a Jhin ult from long range that caught even the casters by surprise.

Suning has become something of a fan favourite at Worlds, particularly as Vietnamese jungler Le ‘SofM’ Quand Duy is the sole representative from his country after teams from the region pulled out of this year’s Worlds due to coronavirus travel restrictions.

While toppling the second seed from its region might be perceived as an upset, Suning has done plenty to prove its skill is far greater than its seeding suggests.

The LPL side will now face the winner of Top Esports vs Fnatic for a spot in the final on what is its first Worlds appearance.

In the other semi-final, Korean top seed DAMWON Gaming will take on either last years runner up G2 or fellow LCK side Gen.G