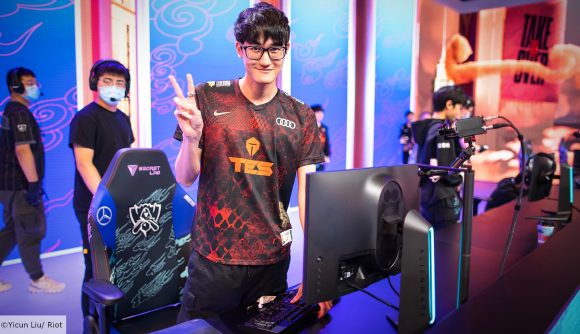 The first round-robin of fixtures for the Worlds 2020 group stage has concluded with the tournament’s two favourites the only remaining unbeaten teams.

Top Esports and DAMWON Gaming, the top seeds from China’s LPL and Korea’s LCK respectively, are the only teams with perfect 3-0 starts to the group stage. This should comfortably see them reach the knockout stage. Top Esports heads Group D, with DRX in second, while DAMWON leads the way in Group B – dubbed this year’s ‘Group of Death’ by many – with JD Gaming in second. No real upsets there then.

Things have been a little more dynamic in Group A and Group C, however. In Group A, G2 failed to keep up its unbeaten streak with a surprisingly feeble defeat at the hands of Team Liquid. The Europeans currently sit tied for the top spot with Suning. In Group C, Gen.G succumbed to the same fate as G2, losing its perfect start to 2011 world champions Fnatic. Both teams are now tied at the top with 2-1 records.

There are three teams who failed to secure a victory in the first round of fixtures, with PSG Talon, Unicorns of Love, and, most surprisingly, Team SoloMid all sitting on 0-3 records. All three teams now need a miracle run and other fixtures to go their way to progress from the group.

The #Worlds2020 Group Stage Standings at the end of the first round-robin! pic.twitter.com/9SLAMLABYW

In terms of upsets, there was very little to report. Depending on what side of the ‘NA teams are bad’ fence you sit in, TSM failing to win at all in Group C could be considered as a surprise.

Team Liquid’s results produced the closest things to upsets we’ve seen so far. It’s defeat to Machi Esports was not widely predicted, while on the other side of the coin the manner in which it defeated G2 was just as surprising.

Throughout the first round of group stage matches, there have certainly been some stand out performers. DAMWON Gaming’s toplaner Jang ‘Nuguri’ Ha-gwon has impressed, while his teammate Heo ‘Showmaker’ Su has also been exceptional in mid.

DRX’s Pyosik has also been slaying on the Rift so far and posted the most individual kills in a match so far when he went 13/1/16 against Unicorns of Love. He also has the third highest kill participation at Worlds so far with over 88%.

Top Esports’ roster has looked insane across the board, but the stand out performers have been former world champion Yu ‘Jackeylove’ Wen-Bo in mid and toplaner Bai ‘369’ Jia-Hao.

There will now be a short one-day break in play before the teams all play each other again in the second round, which will kick off with Team Liquid vs G2.