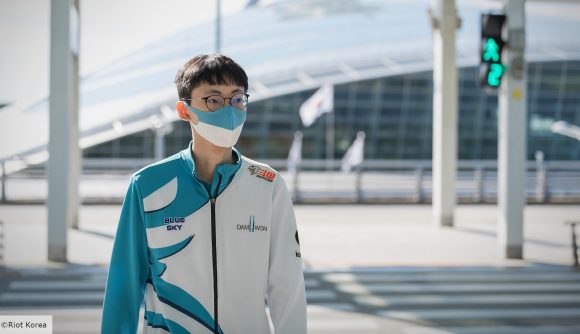 The LCK top seed DAMWON Gaming and the LPL second seed JD Gaming have qualified for the knockout stages of LoL Worlds 2020 after dominating Group B.

DAMWON is on course for a faultless 6-0 run through the group stage, with just a final game against the already qualified JD Gaming remaining. The Korean team came into Worlds as one of the favourites for the entire event, and its crushing victories have proved those predictions correct. Only one of DAMWON’s group stage games so far has gone past the half an hour mark, showing just how ruthless it’s been against the other Group B teams.

JD Gaming’s qualification for the knockouts was confirmed with its victory over Rogue earlier today, which sent the debuting LEC team crashing out of Worlds. It did however fall to bottom of the group PSG Talon in what was the first proper upset of this year’s Worlds, but with JD Gaming already through, it made no impact on the outcome of the group.

PSG Talon will be ecstatic to get that first group stage win on the board and have at least one memory to take home. The PCS team has had arguably the roughest ride to Worlds, having defied the odds by making it out of the play-ins despite using three substitute players from different teams.

There is only one more victory to go until 0 defeat!
We keep our winning streak with DAMWON power and speed!
Send us all your energy and love so we finish first for the Group Stage 🙂#DWGWIN #Worlds2020 #DAMWONGaming #dwg pic.twitter.com/T79sDQtvTJ

With JD Gaming’s loss to PSG, DAMWON is guaranteed to finish top of Group B regardless of the result between the two teams in their match later today.

They join Suning and G2 Esports from Group A in the quarter finals.