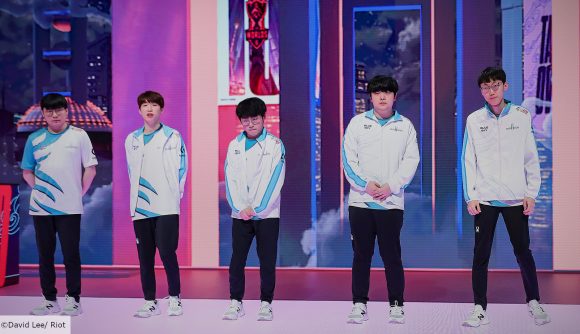 DAMWON Gaming has become the first team at LoL Worlds 2020 to book a spot in the semi-finals after toppling fellow LCK team DRX.

As was predicted by many, DAMWON – billed as one of the favourites to win Worlds this year – got the job done in just three games, looking dominant and in control for the majority of the series. While DRX had some decent plays and held its own for periods of Game 1 and Game 2, DAMWON cemented its place in the semis with a 21-7 annihilation of the LCK second seed, winning in just over 25 minutes. While the entire DAMWON roster played an incredibly strong series, the stand out individual was certainly toplaner Jang ‘Nuguri’ Ha-gwon, whose dominance with Ornn in the second and third matches especially played a big role in his side’s quarter-final victory.

With LCK teams having evolved their approach to League of Legends esports over the course of 2020, according to Worlds analyst Jakob ‘YamatoCannon’ Mebdi, the strength of the region has been widely recognised at this year’s Worlds.

While DRX is now eliminated, DAMWON could still be joined by another LCK representative if Gen.G can defeat G2 on Sunday, October 18 in the last quarter-final matchup.

The winner of that clash will also end up facing DAMWON in the semis, so another all-Korean affair is still on the cards.