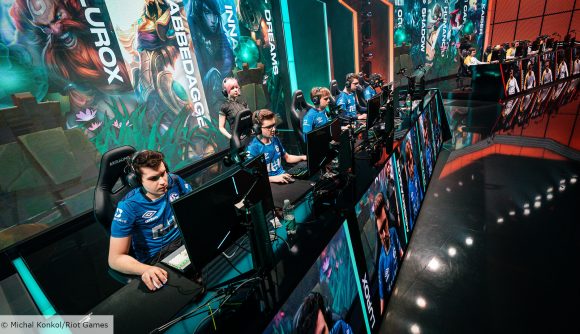 The League of Legends European Championship is delivering some of the most exciting professional League of Legends games out there at the moment, but the production team is still having to split their time between home and the Berlin studio. While it looks like players might have to play the rest of the split online, the LEC commissioner Maximilian Peter Schmidt says that a return to the studio isn’t out of the question, providing they can be brought back risk-free, of course.

This follows on from a decision to move production back online for a week three weeks ago, following the news that caster Trevor ‘Quickshot’ Henry and his wife had come into contact with someone who later tested positive for COVID-19. However, despite some unforeseen hiccups in the process, Schmidt assures The Loadout that Riot Games is monitoring the situation in Germany and will bring players back into the studio when it’s safe to do so.

“It’s not guaranteed to be online only, we’re looking into ways that we can potentially return to the studio,” Schmidt tells The Loadout. “But we’re only doing this if we feel it’s the right call – we are always going to put the health and safety of our players first and if we feel there’s a substantial risk to returning to the studio, then we are not going to do it.

“Currently we are running online and the league is running perfectly fine. We are across from the bumps we initially had from transitioning to this new setup. We are confident in the setup that we have, so we do not see a need to return if it invokes a risk.”

Schmidt doesn’t have a set date in mind for a player return, but given the team is working incredibly well in unusual circumstances, it’s clear that Riot Games isn’t planning to rush this decision.