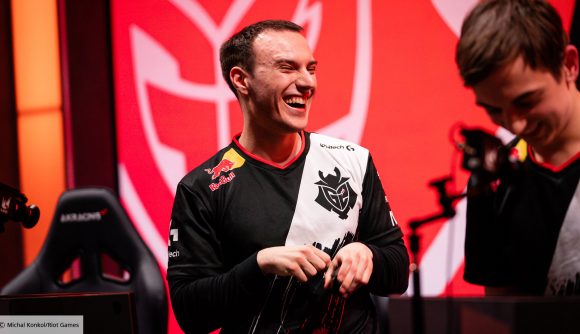 It is a sad day for European League of Legends fans, as G2 Esports has confirmed that Luka ‘Perkz’ Perković has parted ways with the organisation after five successful years. The news follows a whole host of rumours surrounding the midlaner-turn-botlaner’s future, which began circulating in the lead-up to the start of the free agency period.

G2’s goodbye came in the form of a touching montage, highlighting Perkz’s finest moments with the team, including historic victories over SKT and Royal Never Give Up, while drawing on plaudits from LEC casters Trevor ‘Quickshot’ Henry and Eefje ‘Sjokz’ Depoortere.

In the accompanying statement G2 wrote: “After five unforgettable years with G2 Esports, today we say goodbye to our legendary player, Luka “Perkz” Perković. From our early days in the EUCS Summer 2015 to the 2020 Worlds, Perkz has grown from an Outstanding Rookie into one of the greatest players to ever grace League of Legends.”

Perkz’s time in Europe saw him achieve numerous EU LCS and LEC titles, alongside a Mid-Season Invitational trophy after the 3:0 dispatching of the LCS’ Team Liquid in the 2019 final. Perkz even managed to lead G2 to the 2019 Worlds final playing in an off-role as the team’s botlaner. Factoring in his leadership, skill, and all-round versatility, Perkz may very well be the finest player the region has ever produced.

Perkz also shared his own farewell message yesterday via Twitter. “Forever in my heart, end of the chapter and start of a new one,” he wrote. “I intend to dominate. EUROPE please watch me.” The second passage seemingly refers to the LEC veteran’s touted move to North American LCS side Cloud9, where he is expected to reunite with fellow former G2 teammate Jesper ‘Zven’ Svenningsen.

G2 owner Carlos ‘ocelote’ Rodriguez has now released a humourous video reaching out to Europe’s botlaners, as the search begins for Perkz’s replacement. Its message is simple: if you want to play for G2, DM him.