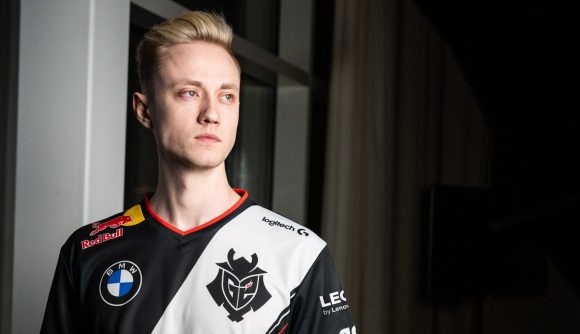 In arguably the biggest move in European League of Legends history, G2 Esports has just announced that it has acquired the services of Martin ‘Rekkles’ Larsson for the 2021 season.

G2 CEO Carlos ‘ocelote’ Rodriguez originally posted a humorous skit after the departure of Luka ‘Perkz’ Perković, advertising the newly-vacant botlane position to Europe’s free agents. However there were rumours beforehand which suggested that Rekkles would be picked up by the team as soon as his own free agency was announced, reuniting him with former Fnatic teammate Rasmus ‘Caps’ Winther.

Rekkles’ announcement comes just two days after the Swede officially parted ways with Fnatic, the organisation he had started his EU LCS (now LEC) career with. The proclamation arrived in video form via G2’s official Twitter page, and features its new star signing giving a monologue as clips from his career are married with shots of the botlaner’s accolades. The final shot shows Rekkles in a rather fitting G2 windbreaker.

“It might look like I always wanted to be a star. Fame came with victory. But the victory is all I ever wanted. With every defeat, I walked away with lessons learnt and more motivation than ever before. With time, the game changed, my life changed. But my goal has always stayed the same. To stand on the biggest stage, at the biggest tournament, lifting the biggest trophy. With the world watching. With you watching. With your strength pushing me forward.”

Rekkles’ speech concludes as he tells us of his desire to break out of his comfort zone to hopefully achieve Worlds glory at long last after eight years of trying with Fnatic: “Maybe you thought I’d stay in Fnatic forever. But I’m ready for a new challenge and grateful for everything you’ve given me. I promised I would win Worlds. And I will.”

The reaction to Rekkles’ announcement has already seen some quick quips and savage memes. LEC caster Andy ‘Vedius’ Day was left clearly incredulous after the news broke that the Nocturne one-trick would not be joining the G2 roster for the 2021 season. Meanwhile, G2’s academy team made a quick jab at Rekkles’ former team Fnatic now their former-franchise player had joined up with the main squad.

With Rekkles’ addition, G2’s roster for 2021 is seemingly complete. Considering the sheer amount of talent this line-up boasts, the onus will now be on the team to perform on the Worlds stage.