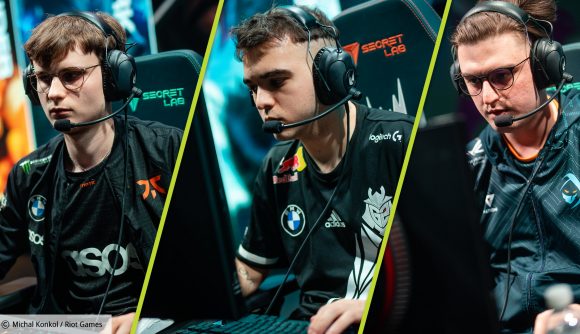 There are three certainties in life: death, taxes, and Fnatic vs G2 Esports – whatever the esport may be – always being an absolute banger. This weekend’s 2022 LEC Spring Playoffs tie between the two remained true to form, as G2 Esports eventually fell 3-1 to the boys in black and orange after a top-tier League of Legends display.

Although G2 now finds itself having to run the gauntlet in the lower bracket, botlaner Victor ‘Flakked’ Lirola is fairly happy with the team’s performance throughout the series. “From one-to-ten I would give us a 7.5,” he tells The Loadout in a post-match interview. “I think we need to improve on the small details and we’ll get to finals again, and we’re going to try and get revenge on Fnatic.”

In the lead-up to the series, the Spaniard found himself on the receiving end of some friendly trash talk from Fnatic jungler and fellow countryman Iván ‘Razork’ Díaz. Prior to finding their homes in the LEC, the pair have a history of showdowns in Spain’s SuperLiga – Flakked representing S2V Esports at the time, while Razork donned the Vodafone Giants jersey. While that friendly rivalry persists, there’s nothing but love between the two players.

“We have that level of friendship where every time we can, we just try to banter each other out,” Flakked says with a smirk. “I really like him, and Fnatic were a better team today, so I’m really happy for them and especially for Razork because I think he played fine as well.”

Coming into the series, Flakked had only made two appearances on Aphelios this split, with both occasions ending in defeat. However, after dropping the champion for the rest of the regular season due to the poor results, the team brought it back to bolster its drafting power for the games against Fnatic. As Flakked admits, though, it may have been too late into G2’s preparations.

“We started playing it really recently – maybe two days ago,” he says, “so I didn’t have too much [time to] focus on the champion, but it is one of my comfort picks.” On top of this, G2’s bot lane had the unenviable task of trying to contain current LEC All-Pro First Team incumbents Elias ‘Upset’ Lipp and Zdravets ‘Hylissang’ Galabov – a duo both Flakked and partner Raphaël ‘Targamas’ Crabbé had mixed success against throughout the regular split.

“I was working a lot by myself and with Targamas during the break between the regular split and playoffs,” says Flakked, “because in my personal opinion I feel that our top/mid/jungle is better than Fnatic’s. So in my head I was just like ‘if we can manage to hold them [we’ll win].’”

While it didn’t quite pan out for G2 in the end, Flakked is mostly happy with how Targamas and himself played in the laning phase, despite some missteps here and there. “I think we managed to hold them,” he says, “and we even got ahead in some of the lanes which I’m really happy about, and it gave me a lot of confidence.”

Upset and Hylissang may have been considered Europe’s premier bot lane pairing for some time now, but Flakked thinks there is one other duo that is even tougher to match up against in a 2v2 – Rogue’s Markos ‘Comp’ Stamkopoulos and Adrian ‘Tymbi’ Trybus.

“Comp and Trymbi are kinda underrated,” he says. “After playing against the Fnatic and Rogue bot lanes, I feel like Rogue’s is the best.”

When asked for further elaboration, Flakked highlights Comp’s aggressiveness – not only in lane but during teamfights – as a standout factor. Though, of course, he thinks that “Upset is fucking insane as well.”

With the LEC sporting plenty of talented bot lanes, Flakked is excited to be able to practice against the best Europe has to offer. “It’s really insane,” he says. “If you come from an ERL, unless you’re a really good team you don’t get to scrim much against really good LEC or TCL teams.

“So during the first month [as an LEC player] you learn a lot of cheeses or different ways to play your matchups. Everything becomes a mental game, because sometimes they’re going to pressure and you think the jungler’s there, but then the jungler’s top lane. Or sometimes – Fnatic did it today – they’ll fake pressure like 20 times and you’ll go to fight them and boom, jungler’s there. I think at this point everybody’s so fucking insane that it just becomes about who can be the smartest.”

Flakked will have another opportunity to stake his claim to be among the region’s best botlaners when G2 Esports begins its lower-bracket run against Team Vitality this Friday.