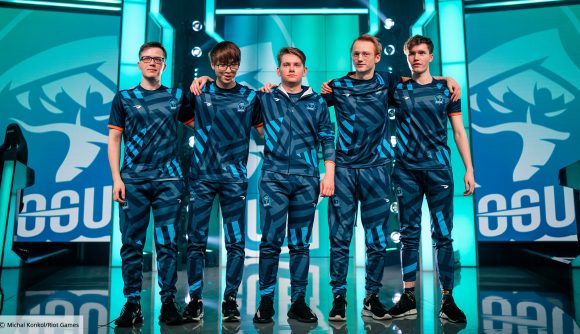 In an unexpected shake-up to Rogue’s 2021 League of Legends LEC roster, toplaner Finn ‘Finn’ Wiestål and veteran support Oskar ‘Vander’ Bogdan are both reportedly set to leave the organisation following the team’s dominant performance in the Summer Split.

Rogue has gone from strength to strength in its most-successful year yet. After a respectable sixth place finish in the Spring Split, the team refocused its energy for the Summer. Having defeated all but G2, Rogue emerged the first place team heading into the Summer playoffs with a mighty 13-5 record.

However, after failing to proceed past a stacked Worlds group, which included eventual champions DAMWON Gaming and Chinese second seed JD Gaming, Rogue’s season came to an unfortunate end. As a result of this, we may now be about to see some big changes to the LEC outfit’s roster ahead of next season and a push for a second appearance at Worlds.

.@clgaming are working on a buyout agreement with @Rogue for @FinnLoL, who would join the North American team as their new top laner, sources told me. Won't be completed until Nov. 16 at 7 p.m. ET.

Finn would replace Ruin, who becomes a free agent that evening.

Finn’s departure would echo fellow toplaner Barney ‘Alphari’ Morris’s projected move to the LCS’ Team Liquid, while regional compatriot Luka ‘Perkz’ Perkovic has also been touted for a move across the pond. Much closer to home, Wolf also reports that Misfits Gaming are currently finalising a buyout agreement with Rogue for Vander.

Sources: @MisfitsGG are finalizing a buyout agreement with @Rogue for @Vanderlol, which is expected to be completed next week.

In 2020, Vander had a stellar year on Rogue, becoming one of the #LEC top supports. Rogue, though, promoted @trymbilol a few weeks ago.

Finn’s 2020 season has seen its peaks and troughs, with the young toplaner having only just completed his first full season of LEC play. Despite putting up decent numbers throughout the Summer Split, particularly on Gangplank and Renekton, the Swede’s form dropped off as Rogue’s playoff aspirations came to a disappointing end against Fnatic in round one. And with Rogue’s rough Worlds campaign being fresh in the minds of spectators, many are questioning the move.

However, having been touted as one to watch only a year ago, we could yet see a resurgence from a player who is still in the fledgling stages of his career. But it won’t be easy, as Finn would find himself on a CLG team having just come off their worst LCS season ever. With Team Liquid’s Mads ‘Broxah’ Brock-Pedersen also rumoured to be heading to CLG, according to a ‘leaked’ roster from Christian ‘IWDominate’ Rivera, this could be a make-or-break move for the European pair.

Meanwhile, Vander has enjoyed one of his finest seasons as a pro, ending the Summer Split with the second-highest KDA in the league (8.6). Notching up excellent performances on the likes of Thresh and Nautilus, we are surprised to see the 26 year-old veteran getting the hook, as Wolf notes academy prospect Adrian ‘Trymbi’ Trybus was actually promoted to the starting spot a few weeks ago.

Much of Rogue’s Summer Split success was due to the work of bot lane/support duo Steven ‘Hans sama’ Liv and Vander. Hans sama racked up a scintillating 80 kills across the Split, trumped only by G2 Esports’ Rasmus ‘Caps’ Winther as well as fellow teammate Emil ‘Larssen’ Larsson who also performed exceptionally well.

This would undoubtedly be an exceptional move for Misfits, pairing Vander with botlaner Kasper ‘Kobbe’ Kobberup. Kobbe has struggled to make an impact on the LEC since his return from a disappointing spell at Team SoloMid in the LCS at the end of the Spring Split. But we shall have to wait and see if Vander’s presence will be enough to relight the fire of Misfits’ duo lane.

With free agency opening up on Monday, we may be about to see some of these rumoured deals begin to come through. To stay up-to-date with the latest movements and transfer rumours, check out our 2021 League of Legends LEC roster guide.