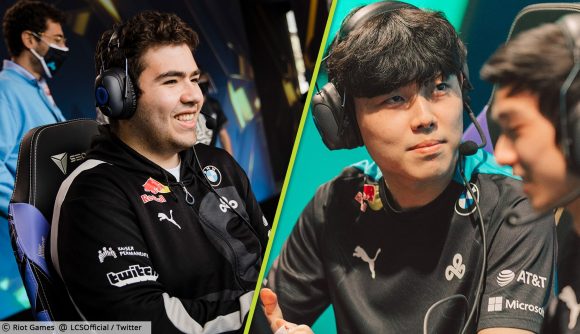 Following a rough end to the 2022 LCS Spring Split for Cloud9, the North American organisation is reportedly looking to make some major changes to its League of Legends roster heading into the second half of the season.

According to sources close to Upcomer’s Brieuc Seeger, current midlaner Ibrahim ‘Fudge’ Allami will be returning to the top lane, while the team is also exploring alternative support options. With this being the case, it seems that Park ‘Summit’ Woo-tae and Kim ‘Winsome’ Dong-keon’s time in the LCS will be cut short – both players joined Cloud9 at the end of last year during the offseason.

On the topic of Fudge’s replacement in the mid lane, Seeger notes that Cloud9 “expressed interest” in bringing Yasin ‘Nisqy’ Dinçer back to North America from Fnatic, though he has apparently instead chosen to remain in Europe in order to join up with the MAD Lions. BISONS ECLUB midlaner Adam ‘Random’ Grepl has also been touted as a possibility, though a move for the Czech has yet to be made.

Closer to home, Cloud9 Academy midlaner Jouhan ‘Copy’ Pathmanathan could also get the nod though, perhaps unsurprisingly, the organisation is looking abroad for inspiration before it commits to promoting the Canadian.

sending fudge back to top lane next week

Winsome’s exit also opens up a place for a new support. Seeger doesn’t mention Jonah ‘Isles’ Rosario as a possibility. The Australian took Winsome’s place for Cloud9’s playoffs run, but it seems he isn’t the long-term solution. A surprise role swap for benched botlaner Jesper ‘Zven’ Svenningsen has been floated, though several options have been explored.

The reported moves mark the dismantling of the Cloud9 experiment initiated by former coach Nick ‘LS’ De Cesare prior to his parting with the organisation just weeks into the Spring Split.