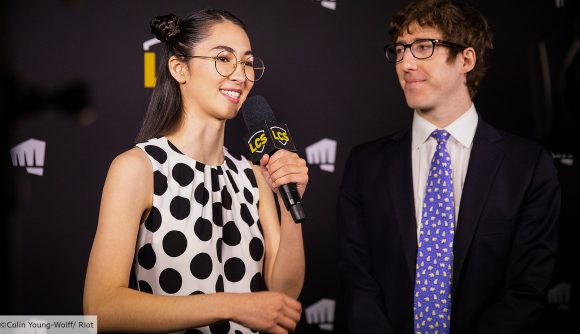 LCS host, interview, and ‘meme queen’ Ovilee ‘Ovilee’ May has announced she is leaving the league’s broadcast team, just days before the Summer Split is due to begin.

In a short video announcement, Ovilee says that she will be stepping down from the official broadcast team but will continue to create her own League of Legends content around the LCS. While Ovilee admits she is sad to be leaving the team for the Summer Split – which kicks off this week on Friday, June 12 with 100 Thieves versus Evil Geniuses – she also says that it is a “blessing in disguise” as it will allow her to create more LCS-focused content than she was previously able to. This will take the form of more videos, player interviews, and streaming, but now just without the official affiliation with the league.

Ovilee will continue to work with Riot in some capacity, however, by assisting them in creating the hype videos that were popular with LCS viewers during the Spring Split. She also teases that there is another exciting project in the pipeline, but didn’t give any specifics.

The LCS will now be without both Ovilee and caster Joshua ‘Jatt’ Leesman from its broadcast team in the upcoming split, with Jatt taking up the role of head coach at Team Liquid. It will be interesting to see if the league replaces – or just does without – two of its familiar faces.

There has also been a scheduling shakeup, with Monday Night League games now being hosted on Fridays after the broadcasts received poor viewership.