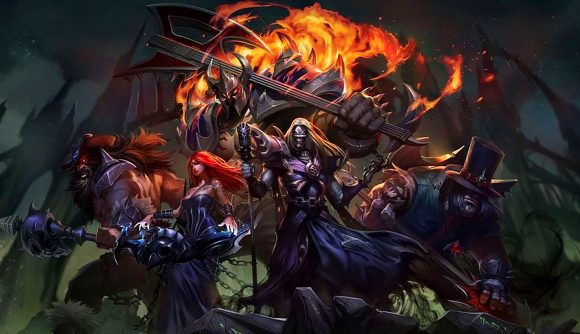 The LCS Mid-Season Showdown has seen a welcome return to LAN play for the North American league, and has done so not in the LCS studio but in one of Los Angeles’ most famous outdoor entertainment venues, the Greek Theatre.

While the main attraction will be the grand final against Cloud9 and the winner of TSM versus Team Liquid, Riot is clearly wanting to make use of its surroundings by putting on a live musical performance before the match. To make it a real spectacle, it’s also pulling its extremely popular heavy metal band, Pentakill, out of hiatus for an in-person appearance.

Pentakill is one of the League of Legends community’s favourite bands, and comprises of in-game champions Mordekaiser, Karthus, Yorick, Sona, Olaf, and Kayle. Pentakill’s performance this weekend, however, will be in-person, with Norweigan metal artist Jørn Lande heading the band and providing lead vocals, according to a blog post. After more than three years without any new Pentakill content, a brand new track – billed to release later in 2021 – will also be teased during the performance, complete with some “killer surprises”.

Despite such a long period on the sidelines, Pentakill remains one of the most loved and listened-to League of Legends band. Since their 2017 album II: Grasp of the Undying, Riot has gone for a more pop, hip hop, and K-pop focus when it comes to in-game bands.

PENTAKILL will perform and debut an exclusive preview of their upcoming song in the 2021 Mid-Season Showdown Finals Opening Ceremony, presented by @Mastercard, this Sunday at 1PM PT / 4PM ET! #LCS

The likes of K/DA have proved immensely popular, so it will be intriguing to see what kind of reception Pentakill gets when it returns this weekend.

Pentakill’s performance at the Mid-Season Showdown, which will determine the LCS’ representative for MSI 2021 in Iceland next month, will take place during the opening ceremony at around 13:00 PT (16:00 ET/ 21:00 BST) on April 11.