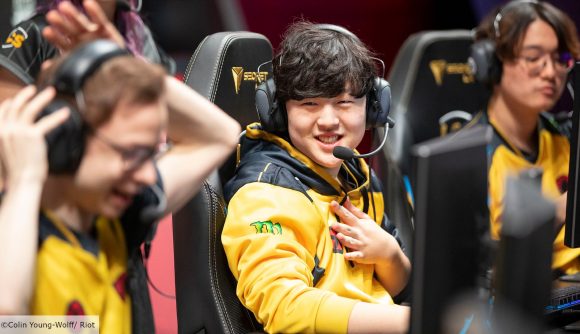 Yiliang ‘Doublelift’ Peng’s high-profile exit from Team Liquid to rejoin Team SoloMid was arguably the biggest League of Legends story of the offseason, but his departure has paved the way for one of North America’s most promising youngsters to make a mark.

During the period of games last split in which the seven-time LCS winner was benched, AD carry Edward ‘Tactical’ Ra got his chance to shine on the Team Liquid roster. He is now the team’s main bot lane choice and is one of the LCS’ most promising rookies. But what’s changed now that Tactical is on the team? Well in an interview with Travis Gafford, Team Liquid’s mid laner Nicolaj ‘Jensen’ Jensen says that there are a few noticeable differences between playing with Doublelift and playing with Tactical.

“I think they’re both two really good AD carries, but I’d say the biggest thing about Tactical is that he’s more selfless and he won’t get annoyed if our jungler is not bottom 24/7,” Jensen says with a wry smile.

“Also he is a rookie, so he brings a fresh mindset and I guess a better attitude towards improving. But yeah I guess this is expected to stuff when comparing a rookie to a veteran player.”

Doublelift confessed after being benched by Team Liquid that his attitude and motivation during the Spring Split was not up to scratch. Tactical impressed during the three-game stint he replaced Doublelift and it appears the rookie is continuing to make a positive impact on the team.

Tactical and Team Liquid got off the perfect start to the Summer Split, being one of three teams to go 2-0, including a win against Doublelift’s TSM.