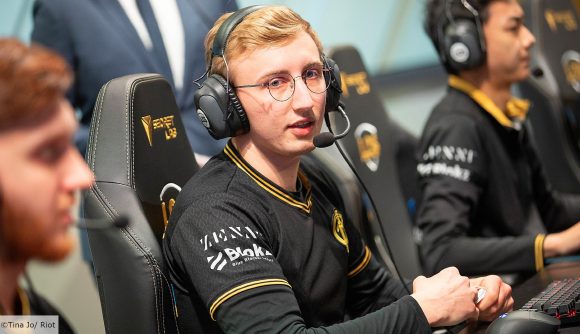 Former Golden Guardians midlaner Greyson ‘Goldenglue’ Gilmer has joined Evil Geniuses in what appears to be a rather odd League of Legends transfer.

Goldenglue, who parted ways with Golden Guardians earlier this split, was initially discovered by ESPN to have signed with Evil Geniuses after his name appeared on Riot Games’ database of League of Legends esports contracts. ESPN also reports that Goldenglue’s contract is currently only a week long, but has the option of an extension which will likely be dependent on how he performs in this week’s LCS fixtures against Team Liquid and Cloud9.

He will head straight into the starting lineup for those two matches, replacing Daniele ‘Jiizuke’ di Mauro. With Italian non-resident player Jiizuke being swapped out for American Goldenglue, Evil Geniuses will now promote South Korean toplaner Heo ‘Huni’ Seung-hoon from its Academy roster for what will be his first start on the main team since he signed from Dignitas in May.

Goldenglue’s short-term signing appears to be a strategic move to be able to bring Huni into the fold to play as Evil Geniuses second non-resident player alongside AD carry Bae ‘Bang’ Jun-sik, who is also from South Korea.

At the end of the 2020 season, Huni will be recognised by Riot as an NA resident player due to how long he has played in LCS. This will give Evil Geniuses the freedom to have Huni, Jiizuke, and Bang all on the same roster, but until then, Goldenglue will be the key to getting Huni some long overdue LCS game time.

LCS rules state that teams can only field a maximum of two non-resident players in a game in order to promote homegrown talent.

While Evil Geniuses is yet to officially confirm the Goldenglue move, the player himself has, joking that a previous tweet about calling himself ‘EG Goldenglue’ “actually worked.”