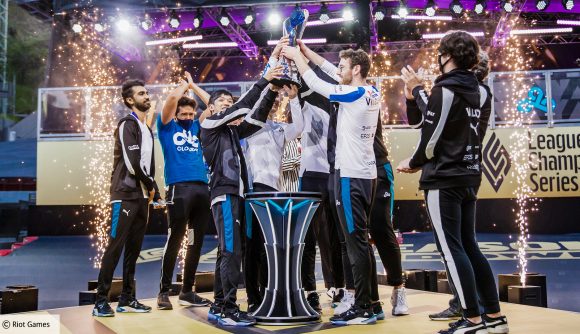 After a thrilling five-game series, Cloud9 has exacted its LCS Lock-In revenge on rivals Team Liquid to win the LCS Mid-Season Showdown. The team will now represent North America at the Mid-Season Invitational in Reykjavík, Iceland next month.

Throughout the series, games were evenly traded between the two teams. Games one and three went Liquid’s way, with two and four going to Cloud9. Game five was by far the most entertaining, thanks to an inspired level one cheese strategy from Cloud 9.

Ibrahim ‘Fudge’ Allami’s Sion cleared the team’s blue buff and gromp with his zombie form, while the trio of Jesper ‘Zven’ Svenningsen, Phillippe ‘Vulcan’ Laflamme, and Robert ‘Blaber’ Huang invaded Liquid’s top side jungle. With three quadrants of the jungle locked down by Cloud9, Jonathan ‘Armao’ Armao could do little but clear his bottom side and wait for the scuttle crabs to spawn. Before Liquid’s stand-in jungler could potentially equalise with Blaber, he was dispatched by Luka ‘Perkz’ Perković, putting him even further behind his opponent.

From there, Cloud9 continued to snowball the game, with Perkz and Zven getting increasingly more and more fed throughout. Down 10,000 gold, Liquid made a last-ditch attempt at contesting for the Baron. However, the team was intercepted before it could get near the pit, the picks came through, and Cloud9 closed out the series.

Congratulations again to @Cloud9 on winning the 2021 Mid-Season Showdown Finals and good luck at #MSI2021! Thank you again to all of our fans, teams, players, staff, partners, and to the @Greek_Theatre for hosting us this weekend! GG WP! #LCS #C9WIN pic.twitter.com/SIGbBznjbp

Cloud9’s victory is also significant as it marks Perkz as only the second player in the history of Western LoL to win both European and North American domestic titles. He joins teammate Zven who was the first to achieve the feat.

With MSI now on the horizon, the West’s most decorated player will now be looking to defend his title in lieu of former team G2 Esports’ absence.