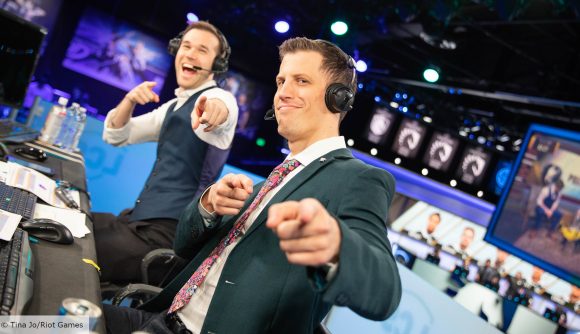 League of Legends commentator Clayton ‘CaptainFlowers’ Rains has found himself in a bit of hot water this week as he failed to meet his call time for the weekly show of This or That, a YouTube series he presents alongside Sam ‘Kobe’ Hartman-Kenzler.

The play by play shoutcaster had been livestreaming on Twitch in the early hours of the morning which consequently meant he didn’t wake up on time to meet his call time with Riot. It hasn’t been announced who will replace him on the show but a new episode will be released as usual. The show used to be hosted with Joshua ‘Jatt’ Leesman who quit casting to work on Riot Game’s balance team but has since returned his old esports commentary role.

As further punishment, CaptainFlowers will not appear on the LoL Championship Series (LCS) this week either. He posted the news himself on Twitter as he wanted to own up to his mistakes without people questioning where he had gone.

The full statement CaptainFlowers released reads: “Today I streamed til way too early in the morning and didn’t wake up for my call time for This or That. This week’s episode doesn’t include me (clearly) and I won’t be on the LCS this week as an additional consequence. I apologize to y’all I’ve disappointed. I should be better.”

Today I streamed til way too early in the morning and didn’t wake up for my call time for This or That. This week’s episode doesn’t include me (clearly) and I won’t be on the LCS this week as an additional consequence. I apologize to y’all I’ve disappointed. I should be better.

The caster adds some extra context on Reddit: “I 100% agree with the decision to not have me on the show this week. Some people on Twitter seem to be mad at Riot and that’s just not the play here. There’s one singular person responsible for fucking up: me. I’m still excited to see what happens in Week 5 and I’ll be more ready than ever to get back into things next week.”

CaptainFlowers isn’t the first LCS caster to bed punished for oversleeping. Former caster Aidan ‘Zirene’ Moon was removed from the Worlds 2018 Group Stage after he missed his call-time to cast some of the Play-In games. The broadcast team were working with difficult time zones as the tournament was held in South Korea while they were based in Los Angeles. Zirene had the opportunity to cast later stages of the tournament but decided to step down to give others an opportunity.