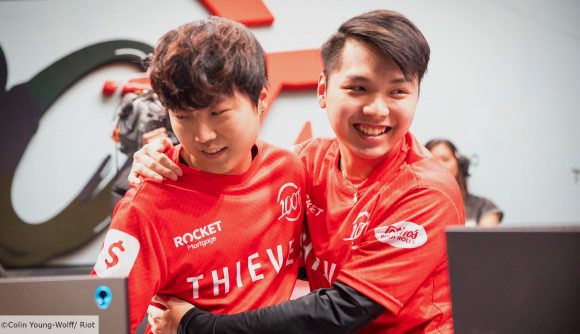 Cloud9’s run of 17 games unbeaten in League of Legends esports has come to an end at the hands of 100 Thieves.

The reigning LCS champion – who was 9-0 coming into yesterday’s matchup – had up until yesterday won all seventeen games of competitive League of Legends it played in since Week 7 of the Spring Split back in March when it fell to TSM. However, the streak was ended in surprise fashion by 3-6 100 Thieves who smashed Cloud9 out of the park in 27 minutes to secure a shock win.

The stand-out performance from 100 Thieves’ victory was definitely jungler Juan ‘Contractz’ Arturo Garcia, who was promoted from the LCS Academy roster last week to replace LoL esports veteran William ‘Meteos’ Hartman. Awarded Player of the Week for Week 5, 20-year-old Contractz popped off against Cloud9 with an Olaf masterclass in which he went 10/1/7, showing that 100 Thieves’ trust in the youngster wasn’t misplaced.

Following the surprise victory, 100 Thieves’ owner and CEO Matthew ‘Nadeshot’ Haag says that he is “so fucking proud” of the LoL team for clinching a win that “brought back so much energy” into the organisation’s players and staff.

Everyone loves a good underdog story! I’M SO FUCKING PROUD OF OUR TEAM. 100 Thieves takes down an undefeated 9-0 Cloud9. This 2-0 weekend just brought so much energy back into our employees, coaches, players and organization. Absolutely love to see it. https://t.co/mHINVRWkoz

Despite Cloud9’s  unbeaten run in the LCS coming to an end, the team is still top of the pile this split with a 9-1 record, but is closely followed by 8-2 Team Liquid.

100 Thieves now edges closer to a playoff spot after also winning against FlyQuest this weekend and is currently 4-6 this split.