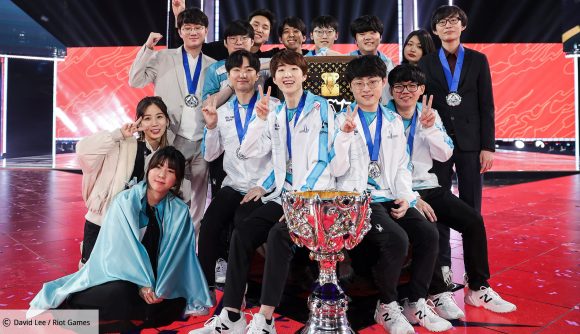 As part of the new agreement, DAMWON Gaming will officially become DWG KIA, with a new logo and uniform also said to be on the way. “After a long consideration process, we are glad [DWG] has come to a sponsorship agreement,” a DAMWON source tells Kang. “The fact our new sponsorship partner already has a track record of reaching out to international fans through esports sponsorship should fill the DWG KIA fans with excitement.”

As the statement alludes to, this is not KIA’s first foray into LoL esports, with the automotive company having sponsored Europe’s LEC since the onset of the 2019 season. Alongisde KIA, three other massive Korean brands are entering naming deals with LCK teams for next season. Banking company Liiv (Liiv SANDBOX), yoghurt brand Fredit (Fredit BRION), and food and beverage company Nongshim (NS RedForce) will be expanding their presence in esports.

2021 will see the LCK join Europe’s LEC and North America’s LCS as a franchised league. This shift effectively removes promotion and relegation to and from the league. As such, sponsorships are crucial to the long-term viability of a league with ten set teams.

From 2021, @DamwonGaming Gaming will officially become "DWG KIA", under a new team logo and uniform as they head into the franchised #LCK (cont) pic.twitter.com/LMR0Y68Rt0

Although the start date for the 2021 LCK season is yet to be determined, the fact that we have already seen the 2021 LCS and LEC Spring Split dates confirmed over the past week perhaps indicates that we won’t be waiting too much longer.