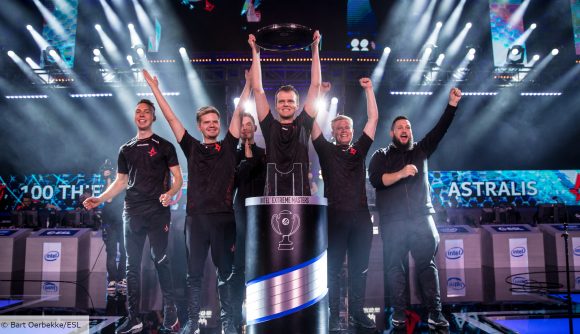 Last year, Astralis made history when they became the first team to claim the Intel Extreme Masters Grand Slam, and it looks like they could do it again for the second time.

The Danish team, who look to be back at their best, entered the race for the third Intel Grand Slam on Saturday, after they dismissed the new 100 Thieves roster in the IEM Beijing final in just three games.

Following Team Liquid’s dominating run of form to claim the second Intel Grand Slam last season, ESL changed the parameters for this year. Now a team can only claim the $1 million prize pool if they win four ESL Pro Tour Masters tournaments in ten tournaments, as long as one of these titles is IEM Katowice, ESL One Cologne, or any other DreamHack or ESL-run Major. Otherwise teams will need six qualifying wins inside a series of ten events.

So far only four Grand Slam events have been played, each won by a different team. So if Astralis wants to win the next Grand Slam with four wins, they’ll have to record victories at the Pro League finals, IEM Katowice, and ESL One Cologne. No pressure.

Astralis’ flawless win at Beijing also brought them back to the top of the HLTV world rankings over Evil Geniuses this week. And regardless of whether they stay there for the rest of the season, Astralis’ success this year means they will always have a place on our biggest esports teams guide.