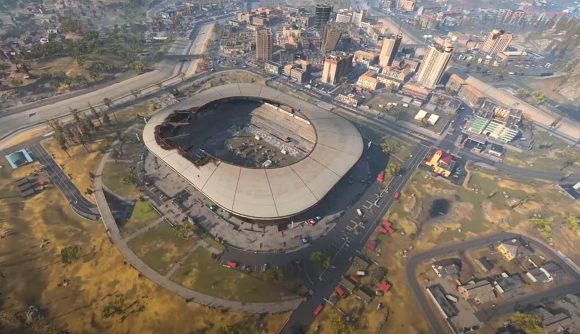 Following Chicago Huntsmen’s exhilarating game five, round 11 victory during yesterday’s Call of Duty League Playoffs match against OpTic Gaming LA, the CDL broadcast sneaked in a short teaser that seemed to suggest there would be more than one place to watch all of next weekend’s finals drama unfold.

After hearing from Huntsmen’s Dylan ‘Envoy’ Hannon following the insane series between his team and OpTic, the broadcast cut to an overhead shot of the Verdansk Stadium in Warzone. While this was completely unexplained, a graphic popped up simply saying: ‘Verdansk Stadium. August 29-30,’ alongside the CDL Championship Weekend logo. The same short teaser was repeated towards the end of the broadcast but was this time actually acknowledged by the on-screen talent, with host Lottie Van-Praag saying that Verdansk Stadium has been “getting ready” for the Championship Weekend.

“As you know the stadium recently opened up inside Warzone and the timing couldn’t have been more perfect,” she says. While this is slightly cryptic, it pretty much confirms that Warzone players will be able to watch the final four CDL teams in some capacity during the Championship Weekend.

While advertising boards for the CDL have been around the stands in Stadium since it opened up, that’s been as far as the links to the league have gone.

Stadium currently has three screens mounted above the stands behind each goal, but these look a little small to accurately watch the action on. If this is to really be a proper method of watching Champs outside of the official stream on YouTube, then players might struggle.

Unless a bigger screen is added into Stadium, along with a bespoke Warzone mode (similar to Fortnite’s in-game concerts and live events) that prevents doing damage to other players and an unlimited match duration, this will likely be just a gimmick to entice people to watch the CDL stream on YouTube, rather than give players an alternative way to see who will be crowned CDL 2020 champions.