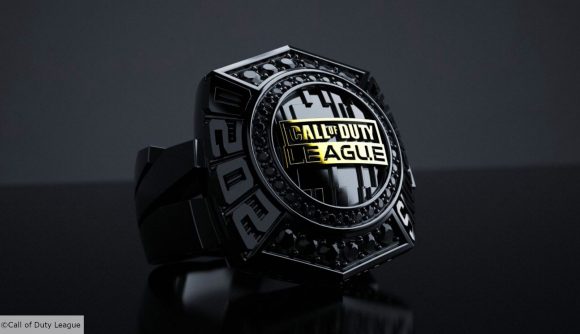 As if competing for a massive $1.5 million top prize wasn’t enough of a reward for winning the inaugural season of the Call of Duty League, the victorious team will also get a bundle of insane prizes to go along with that paycheck.

After showing off the all-black CDL Championship trophy a few weeks ago, the league has now revealed the design for this year’s Championship ring and a few extra goodies that the winning players can commemorate their victory with. The ring is styled similarly to the trophy with its all-black design (complete with black diamonds, of course), but it’s the bonus prizes of custom Jordan shoes and an actual throne that have got tongues wagging.

The bespoke Jordan 6 shoes are pretty fly – again, black is the dominant colour, but with a nice gold accent to it. However, the fact that players will be sent a throne for being part of the best team in the league is pretty amazing. The throne has been designed by Sheron Barber and while it looks pretty imposing with its towering back and sharp edges, we doubt it will be replacing the players’ comfy gaming chairs in their setups any time soon. Think of your posture, chaps.

So with a bundle of $1.5 million, a sleek new trophy, black diamond Champs rings, custom Jordans, and a bloody throne, it’s safe to say this year’s CDL champions will be able to flex like never before.

The glory of sitting atop the Call of Duty League: Throne designed by Sheron Barber (@MrSelfMade).

It’s not just the players that will be rewarded throughout Champs Weekend, however. Fans will be able to receive drops from watching the action on the Call of Duty League website, which range from CDL weapon skins to codes for the Black Ops Cold War beta that will be dropping later this year. Sweet.

There’s also been an update on what role Warzone will play in the coverage of Champs. According to Dexerto, a secret bunker in Verdansk will be showing a stream of the action, so you can watch in-game with your Warzone squad. The bunker will also hold a virtual lifting of the trophy ceremony for the winning team.