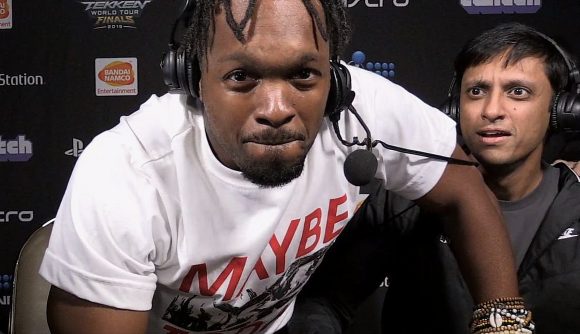 What does every video game fan love? A brand new playable character in their favourite title. What do they love even more? Two of them. And that’s exactly what Tekken 7 fans were treated to at the Tekken World Tour with the reveal of brand new fighter, Fahkumram, and the reintroduction of Tekken legend Ganryu.

The crowd in Bangkok went wild as the reveal trailers for Ganryu and then Fahkumram played. All new muay thai-style fighter Fahkumram is of Thai descent, which sent the home crowd into raptures. But it wasn’t just the audience that were losing their minds over the latest additions to Tekken 7.

Two of the events casters, Reepal ‘Rip’ Parbhoo and Steve ‘Tasty Steve’ Scott went crazy live on stream as the reveal trailer ended, shaking each other in disbelief to the point where Rip falls off his chair. A pumped up Tasty Steve then gets up and slams his fist on the casting desk, shouting “Let’s go! Let’s go! If you’re not playing Tekken, then what are you doing? What are you doing?”

Their hysterical reactions make the crowd howl with laughter and as the exhausted pair begin to catch their breath, they look around with an embarrassed expression. A voice, presumably from a production crew member, can also be heard telling the pair: “You guys broke the table. You broke the table, sit down!”

The clip of Rip and Tasty Steve’s reaction has been viewed over 65,000 times on Twitch.

As well as the exciting reveal of the two new fighters, who will both be available next year as part of the third season pass, there was some incredible Tekken 7 esports action in Bangkok.