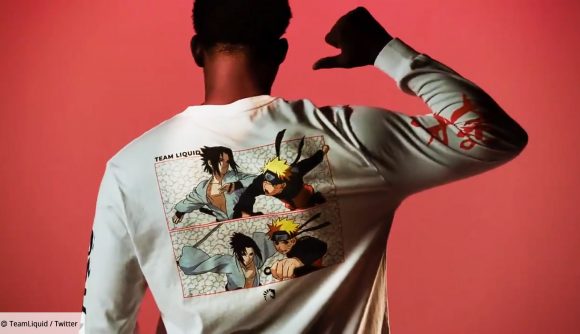 North American esports organisation Team Liquid has announced that it is working together with hit anime series Naruto Shippuden to produce its latest apparel collection. The new drop is set to feature popular characters from the show, focusing heavily on the Hidden Leaf Village’s Team 7: Naruto, Sasuke, Sakura, and Kakashi.

From the teaser shown on Liquid’s Twitter account, we can see that the drop will feature a kunai-branded denim jacket, cargo pants, a windbreaker, and various T-shirts and hoodies among other items which heavily feature both the Liquid and Naruto logos. The collection is only available exclusively in the United States, which is unfortunate for fans further afield. Those who are able to get in on the collaboration better practice their Flying Thunder God Technique though, as it will undoubtedly sell out quickly when it goes live on the Liquid store on February 12.

Discussing the partnership, Liquid’s chief business development officer, Mike Milanov, says that the organisation’s goal is “to continue excelling in the world of apparel and innovative co-branded programmes.” Milanov also notes that gaming and anime are a common crossover, making Liquid’s decision to collaborate with “one of the most successful anime franchises of all time” – as an organisation full of anime fans itself – a no-brainer.

The full teaser can be seen below. In it, actor and director Dominique ‘King Vader’ Barrett – best known for his live-action anime skits – can be seen modelling the collection alongside members of the organisation’s League of Legends team.

This isn’t the first time Liquid has dropped a major collaboration. The organisation partnered up with Marvel in 2019 to launch a range of Avengers-inspired jerseys. This was later followed up with X-Men, and now WandaVision-inspired merch.