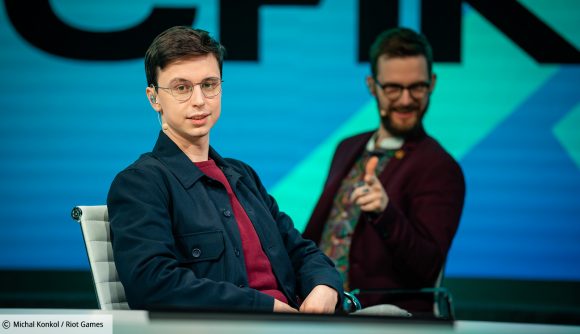 Excel Esports has already strengthened the starting lineup of its League of Legends squad with the addition of Mihael ‘Mikyx’ Mehle this season, but the UK-based organisation has now made another major signing, this time adding former player and current LEC analyst and caster Marc ‘Caedrel’ Lamont to its content creation team.

Speaking to The Loadout as part of an upcoming interview, Caedrel says the decision to link back up with Excel is a “no-brainer”, having been part of the team for two years prior to his retirement from pro play. Enjoying a synonymity with the organisation and its community – particularly in the meme department – Caedrel says that when he was looking to find a home to help push his content creation forward, Excel was by far the “most comfortable” choice.

Having left Excel in late 2020, Caedrel remains close with both CEO Wouter Sleijffers – who in a press release says that he looks forward “to seeing what we can achieve together” – as well as esports director Tim Reichert who he worked with at Schalke 04 back in 2017. With head coach Joey ‘YoungBuck’ Steltenpool and starting botlaner Patrik ‘Patrik’ Jírů also remaining from Caedrel’s tenure, the Brit is surrounded by plenty of familiar faces.

Despite joining up with Excel, Caedrel will still retain his LEC role, similarly to how other talent such as NLC caster and LEC regular Georgia ‘Troubleinc’ Paras is also a content creator for SK Gaming. While this may raise some eyebrows surrounding potential conflicts of interest, Caedrel notes the growing trend of talent joining organisations as content creators on the side, and strongly asserts that his affiliation with the team won’t affect his work on-air.

What a nightmare. No ULT cancelling around here 👀

“As much as I might sit here, off-cast and say ‘oh, I hope Excel wins’ – I’m part of the org at the end of the day – when I’m on broadcast, I’m just a person who enjoys good League of Legends, and I’ll discredit bad League of Legends,” Caedrel states. “That’s my job, and there’s a clear separation for me.”

With Excel currently fifth in the LEC heading into the final week of regular season play, Caedrel could finally reach playoffs with the organisation, albeit in a different capacity.

For more Caedrel content, keep an eye out for our full chat with him over the coming days. In the meantime, be sure to check out Your Shop if you haven’t already. You won’t quite find Excel Worlds skins in there, but there may be a deal to be had elsewhere.