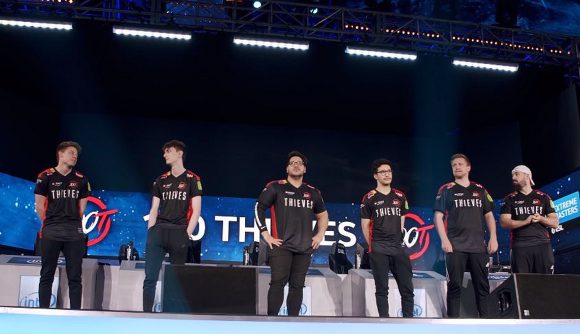 100 Thieves will reportedly be pulling out of the Counter-Strike Global Offensive scene and dropping its roster just 12 months after signing them.

According to reports from HLTV, the organisation – which is headed by former Call of Duty pro Matthew ‘Nadeshot’ Haag – will be exiting the CS:GO esports scene for a second time after it dropped its first roster in 2018 due to issues with visas and player conduct. 100 Thieves’ current squad was acquired from Oceania team Renegades and found early success, climbing up to fifth in HLTV’s world rankings.

However, 2020 has seen the team fail to replicate its early success, and its head coach Chet ‘Chet’ Singh announced he was leaving earlier this month to join NRG’s Valorant squad. 100 Thieves has also invested big in Valorant after picking up former CS:GO stars like Spencer ‘Hiko’ Martin and Nicholas ‘nitr0’ Cannella, and it now appears to be prioritising Riot’s FPS title over Valve’s.

Recent reports from DBLTAP also suggest that 100 Thieves’ standout player, Australian rifler Justin ‘jks’ Savage, is close to signing with Complexity. This could be another reason why 100 Thieves is reportedly looking to disband the roster.

HLTV’s report has also rekindled predictions that 100 Thieves is plotting to return to Call of Duty esports, where Nadeshot made his name as a pro and the organisation won multiple pieces of silverware before the scene switched to a franchise model.

Many believe this could become a money-saving move to free up funds for a potential franchise spot bid. Reports last month suggested OpTic Gaming LA’s spot in the Call of Duty League could be up for grabs if former owner Hector ‘HECZ’ Rodriguez reacquires the brand and pulls them out.

Whatever the reasoning, 100 Thieves attempts at success in Counter-Strike have been chequered to say the least. With big investment in an emerging Valorant scene, titles in Fortnite esports, and a spot in the League of Legends Championship Series, CS:GO has definitely not been as successful as its other esports ventures.