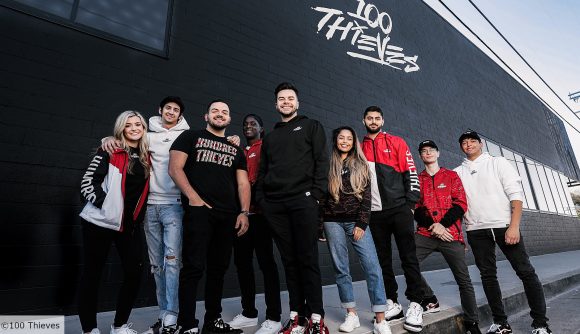 Situated in Los Angeles, the Cash App Compound boasts a number of streaming studios for 100 Thieves’ content creators, a production studio, boardrooms, an apparel design studio, and training facilities for its League of Legends, Fortnite, and CS:GO esports teams. A number of sponsors have attributed their names to some of the rooms (such as Totino’s and Rocket Mortgage), with Cash App even being featured in the name of the facility itself.

During the announcement video, Nadeshot takes fans on a guided tour around the new facility, bumping into content creators like Jack ‘CouRage’ Dunlop and Rachel ‘Valkyrae’ Hofsetter and at one point walking in on the 100 Thieves CS:GO players putting their new training room to good use – by all doing shoeys.

Towards the end of the tour, Nadeshot takes fans through the only “incomplete” area of the new facility: the trophy display. Despite some successes in the organisation’s short life span, Nadeshot assures fans he is driven to filling out that corner of the compound with even more trophies this year.

“I promise you, in 2020, we have one goal and one goal only,” he pledges, “and that is to win more championships.”

Nadeshot also hints that there may be an announcement in the near future about a potential new content creator joining the organisation after he peers into one of the compound’s streaming rooms and says: “Nope, can’t talk about that… That’s coming soon.”

State of the art facilities like the Cash App Compound that bring together all aspects of an organisation under one roof are becoming increasingly popular with esports brands. Team Envy is currently close to completion on its impressive looking facility in Dallas, while in Europe Team Vitality recently revealed its own new headquarters, The V.Hive.