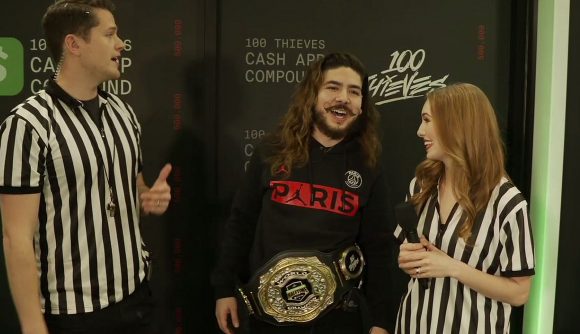 A $500,000 prize pool, over 27,000 concurrent viewers, and some fierce competition featuring one of the biggest brands in competitive gaming. While this sounds like a big esports tournament, this was in fact a very valuable few games of the card game Uno.

Mobile payment service Cash App may have already lent its name to 100 Thieves’ brand new facility, but it went one step further in putting up a $500,000 prize pot for the Half a Million Halftime Show, an Uno tournament at the Cash App Compound that featured a number of content creators who would battle it out for a grand prize of $125,000.

The final would see 100 Thieves’ quartet The Mob take on FIFA streamer Edwin ‘Castro’ Castro, with the latter claiming the victory (and the cash) with a blue six. Castro had fought off a number of other members 100 Thieves family, such as the organisation’s founder Matthew ‘Nadeshot’ Haag, Jack ‘CouRage’ Dunlop, Rachel ‘Valkyrae’ Hofsetter, and Moe ‘Yassuo’ Abdalrhman. There were also spots at the table for Fortnite pro and streamer Dennis ‘Cloakzy’ Lepore and Call of Duty caster Clint ‘Maven’ Evans.

With an average audience of 27,000 and a peak of 37,000, there were plenty of people tuning in for some Uno action. They were treated to some hilarious moments and huge plays, including this streak of three +4 pick up cards in a row to absolutely ruin Nadeshot.

While this particular Uno tournament was played with traditional cards, the electronic version of Uno got its first ever Twitch Rivals competition this month, featuring the likes of Turner ‘Tfue’ Tenney and Aydan ‘Aydan’ Conrad.