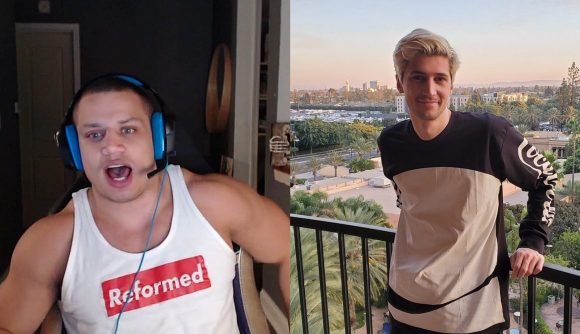 Two of Twitch’s biggest streamers traded shots last night as both of their viewers stoked up an indirect feud between the two by sending them clip after provocative clip.

Former Overwatch pro turned variety streamer Felix ‘xQc’ Lengyel and T1’s League of Legends streamer Tyler ‘Tyler1’ Steinkamp both had some fiery words for each other – although the pair never directly spoke. Instead, each streamer’s viewers were acting as the middleman, clipping every jibe and passing it along.

As spotted by Dot Esports, the feud was sparked after Tyler1’s viewers reported that xQc – who was in an Among Us lobby packed with other big streamers – had said a derogatory comment about his girlfriend ‘Macaiyla.’ This caused Tyler1 to criticise xQc for tilting over a “children’s fucking party game.” This appeared to really get under the French-Canadian’s skin, as he then went on a heated – and slightly incoherent – rant about not only Tyler1 but his beloved League of Legends as well.

“Guys, he’s playing some fucking Teletubbies, Lego rip off, dog shit, playdough, garbage, dollar store Dota,” xQc tells his viewers. “He’s spent his entire life on it. One day he’s gonna wake up, he’s gonna be in like his sixties, and he’s gonna realise he spent 40 years of his life playing a game that is made for 12-year-olds.”

xQc later takes aim at T1, the esports organisation that recently signed Tyler1 as a content creator, calling it “just a telecom company that puts wires in your walls” in reference to its past SK Telecom brand.

On seeing this rant, Tyler1 couldn’t help but bring up the irony of xQc accusing him of playing a children’s game while streaming Among Us.

“Is he some kind of dumbass?” Tyler1 says. “What are you playing xQc? A fucking party game, with random strangers, who only tolerate your shit because you have viewers.” The T1 streamer then accuses xQc of “viewbotting,” a claim he has also made on a couple of previous occasions.

Both Tyler1 and xQc are hardly strangers to getting involved in beef with other streamers, and while both have promised in the past that they are trying to move away from that, it seems the pair will always let that slide when it comes to each other.