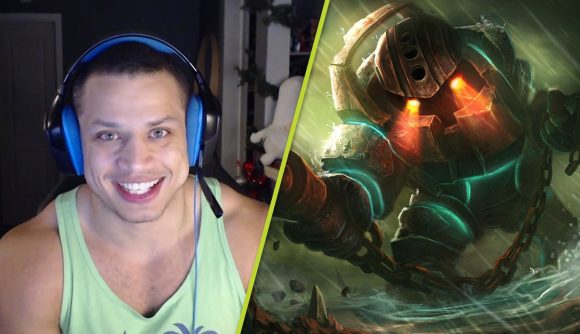 He’s been there, done it, and got the medals – last month, streamer Tyler ‘Tyler1’ Steinkamp became only the second League of Legends player ever to complete the five-role Challenger gauntlet after hitting the top rank as a support. You’d think after an accomplishment like that, you’d want to take some time away to reflect, to relax, and to likely rest your battered carpal tunnel. But Tyler1 is ploughing on and grinding as hard as ever, and is now up into the top 50 players on the North American server on his support account.

Tyler1’s ‘COOKIEMONSTER123’ account currently sits (at the time of writing) at 47 on the NA leaderboard, seeing him rub shoulders with some of the continent’s best players and pros from the LCS.

90% of his games on this account have been as a support, and while he’s previously blasted the role for being too easy, he’s not slowing down. Despite completing his challenge well over a week ago, Tyler1 has still played 125 games of LoL in the past seven days, according to his OP.gg page.

While this does include a few cheeky Draven botlane games (this is Tyler1 we’re talking about here) the vast majority of these are still as a support, showing he’s either still dedicated to completely mastering the role, or he’s taking full advantage of how easy it is to play (if you believe his analysis of the role).

These recent matches have all mainly hinged around his three main support picks from this season: Nautilus, Pyke, and Karma.

Tyler1 clearly wants to see how far he can climb up the LoL ranks this season as a support. Obviously, the plaudits of becoming a five-role Challenger haven’t stifled his hunger for sweet, sweet LP.