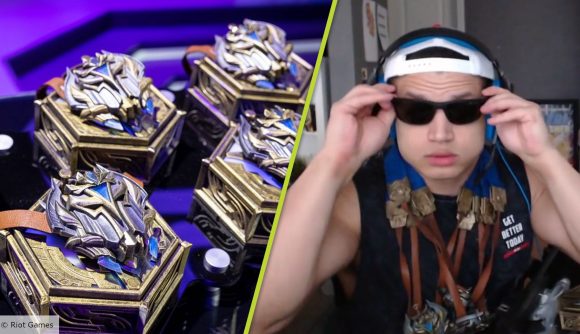 From serving a 20-month ban, to being suspended from creator programmes, to being labelled one of the game’s most toxic players, Tyler ‘Tyler1’ Steinkamp has certainly had a tumultuous relationship with League of Legends and its developer Riot Games. However, with his recent achievement of becoming a five-role Challenger, he’s clearly earned the respect of Riot, which has rewarded him with a bespoke gift – or should we say, gifts.

To commemorate Tyler1 hitting Challenger in the LoL ranks as a toplaner, midlaner, jungler, botlaner, and support, Riot has sent the streamer five custom made medals, each featuring the Challenger rank icon. Each medal’s strap shows the date he achieved Challenger on a specific role. The medals also came with an illuminated display board, just in case all that ice becomes a little too heavy for Tyler1’s neck.

When opening the gift on stream, Tyler1 tells his chat that he hoped Riot had sent “a check for five billion dollars for consistently playing this dog shit game, a contract to run Riot Games, a statue just showing my sheer size and swagger, [and] a key to a new [Lamborghini].”

While the medals don’t quite live up to his expectations in terms of market value, it’s clear that Tyler1 was appreciative of his bespoke gift.

Now that Tyler has opened his gift, we can share it with the rest of the internet. Congratulations one more time, and enjoy the medals @loltyler1. We look forward to the next challenge you come up with!

Despite going against his often critical stance of Riot Games, he did remember to thank the developer for acknowledging his five-role Challenger achievement.

While Tyler1, the second person to hit Challenger in all five roles, is certainly deserving of his medals, many were questioning why Riot hadn’t made a similar effort for the first player to complete the gauntlet, pro player Felix ‘MagiFelix’ Boström.

Despite a rocky past with the developer of the game he’s grinded and streamed for years, it’s pretty amazing to see Riot Games now holding Tyler1 and his achievements in such high regard.