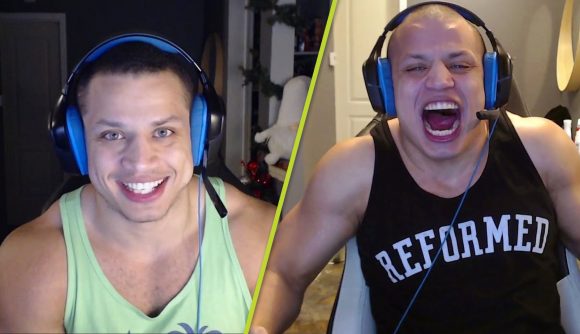 Tyler1 first started the solo queue challenge on a new account back in early 2020, starting with AD carry. After achieving Challenger there, which is his main role, he moved onto Jungler, which proved to be a trickier beast. This took Tyler1 over 1,000 games to achieve – even after claiming it was the “easiest role” – and one broken headset.

From there, he moved to the top lane, where he hit the top rank after 1,700 games, and then the mid lane late last year.

And now, just over two years from starting out on this journey, Tyler1 has achieved the seemingly impossible – becoming the second person to achieve Challenger in all five League of Legends roles after hitting the top rank as a support. This achievement was watched by an average of 52,000 viewers according to Twitch Tracker, something Tyler1 took great delight in as he declared himself as a “fucking problem on the fucking Rift”.

Many online have been quick to celebrate Tyler1’s achievement, including Riot Games itself. The official League of Legends account tweeted to say the streamer was “built different” and that it would be sending something to celebrate his achievement in the coming weeks.

Out of all the climbs, it appears that Tyler1’s climb to support Challenger was the smoothest. The streamer achieved this in just 443 games, according to his OP.GG profile, which is pretty impressive given the amount of time he spent in other roles. That’s also represented in his view of the roles, too.

When asked about which role he found the easiest, Tyler1 says it was definitely support, noting he was on “autopilot” for the most part. Top lane was the hardest due to the limited champion pool, the threat of the jungle, and counterpicks.

The fact that Tyler1 has become only the second player to achieve this feat proves just how much of a challenge it is. The first ever five-role Challenger was Swedish pro player Felix ‘MagiFelix’ Boström, who completed the gauntlet in 2020.

Given the vast number of players hardstuck in Gold – us included – this is an incredible achievement and yet further proof that the man himself is indeed built differently.