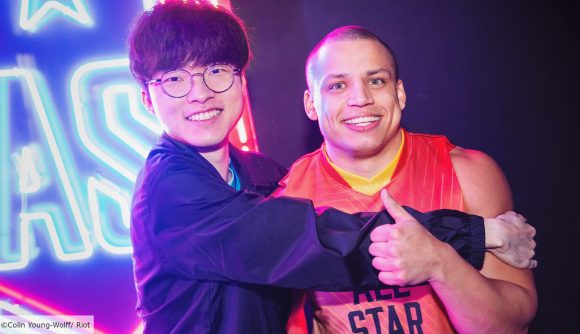 Over the last few months, something of a bromance has been blossoming between the biggest League of Legends streamer in the world, Tyler ‘Tyler1’ Steinkamp, and the three-time Worlds champion Lee ‘Faker’ Sang-hyeok.

In what is one of the strangest pieces of LoL content we’ve seen in a while, the pair are sent on a dinner date to the Heart Attack Grill, a burger bar serving some of the unhealthiest food imaginable which has waitresses in nurses uniforms that spank you if you don’t finish your meal. Yes, really.

When it came to ordering, Tyler1 obviously went for the most “alpha” choice on the menu: The 19,000 calorie Octuple Bypass Burger, complete with a side of fries and a chocolate brownie thick shake. Meanwhile a slightly uncomfortable looking Faker was pressured by Tyler1 to upgrade his single burger to a double, and was given some stick for ordering the accompaniment of “just water.”

While waiting for their burgers to arrive, Tyler1 quizzes Faker on what his favourite food is, clearly realising from his lack of enthusiasm that it certainly isn’t burgers.

“Have you ever eaten Korean chicken? That’s good,” Faker replies, before he politely declines Tyler1’s invitation to go and get some in the future. “I’m busy… Sorry,” he says.

After Tyler1 fails to eat his monster burger, he then faces the bizarre Heart Attack Grill tradition of a spanking from his waitress. Not the most alpha look.

The video was one of the first to be posted by Faker’s team, T1, on its new YouTube channel, which is dedicated to stream highlights and content for English-speaking fans. This is yet another step by Asian teams trying to market themselves to fans in Europe and North America.