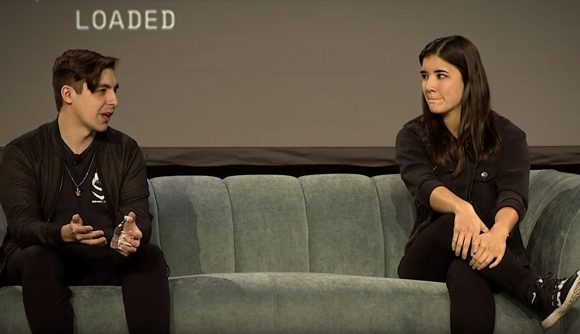 Popular streamers Michael ‘Shroud’ Grzesiek and ‘AnneMunition’ have called on game developers to do more to combat stream sniping, saying that it is harmful to both the streamer and the developer if they don’t.

Speaking at the 2020 DICE Summit, the two streamers were quizzed on what negative implications streaming has on the gaming experience. Stream sniping and having unauthentic gameplay because of viewers attempting to sabotage your experience were immediately brought up, with AnneMunition saying that while streamers are a tiny percentage of players, not catering to their needs could impact the developers themselves.

“I feel like there’s a lot of things developers need to consider… Streamers are only a small percentage, but we are a very visible percentage for those that are playing the game,” AnneMunition says. “Sometimes we have 10,000, 20,000 people watching us and if you’re not having a good experience because people are actively trying to make your game experience bad by stream sniping you or finding you in the game and griefing you, then we’re not going to have a good experience playing the game. We’re probably gonna move on to something else.”

Her sentiments were echoed by Shroud, who says that both developers and viewers often laugh off the idea of protecting streamers from snipers. However, he believes there’s “always got to be a ‘streamer mode’” for content creators to use.

Stream sniping has plagued streamers playing multiplayer titles for years, and while it’s common knowledge that streamers are unhappy with it, developers don’t seem to realise the implications it may have on them too. If a streamer is having a bad experience, potential players are going to witness it.

Streamers have tried plenty of workarounds to try and make it harder for people to stream snipe, such as putting a delay on their broadcasts or covering matchmaking timers and server codes with graphics or their facecams.

Despite the massive influence streamers have on games, as is evident from the recent explosion in popularity for the likes of Escape from Tarkov, many developers are failing to make their games streamer-friendly.