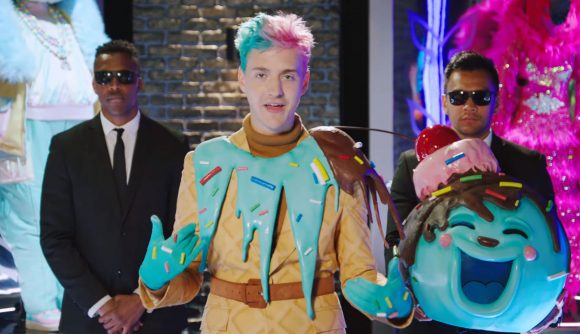 He’s the most famous face in gaming and has appeared on national television multiple times, but none were quite as strange as this one.

Fortnite streamer Tyler ‘Ninja’ Blevins was one of the guests on Fox’s celebrity talent show The Masked Singer on September 25. The premise of the show is to get a disguised celebrity to perform a cover of a song and for a panel to judge them, all while trying to determine the identity of the mystery performer.

For his performance, Ninja disguised himself as a giant ice cream – complete with a waffle cone two-piece suit and a massive bubblegum ice cream scoop as a headpiece – and belted out a rendition of Lil Nas X’s smash hit Old Town Road. None of the judges managed to work out Ninja’s identity but there was a slightly awkward moment during his reveal as host Nick Cannon described him as a “Twitch superstar,” despite Ninja leaving the platform earlier this year to stream exclusively on Mixer.

When this was pointed out by esports consultant Rod ‘Slasher’ Breslau on Twitter, Ninja replied to say that he was still technically Twitch’s number one.

Still most followed on twitch 😉

Despite the meteoric rise of streamers such as Turner ‘Tfue’ Tenney, they still have a very long way to go before topping Ninja’s immense follower count on Twitch of over 14 million.

During the show, judges receive hints in both the performance and a short profile video about the contestant as to who they are. For Ninja, they had party streamers in the background to represent his profession and had him break a concrete block with a karate chop, as a ninja would.

His performance on The Masked Singer is another entry on the long list of appearances the streamer has made in the mainstream media, further solidifying his position as the world’s most well-known gamer.