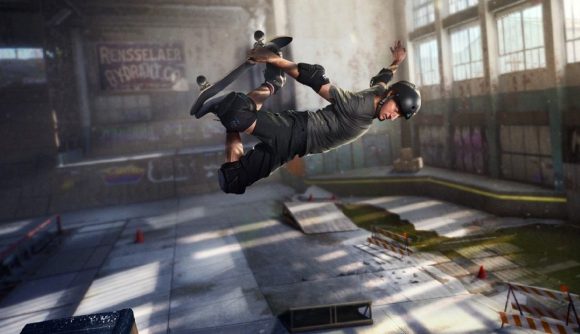 The pair will be live tomorrow from 2:30 PM EST to 5 PM EST, when the Hawkman will be McTwisting his way through the warehouse as fans finally get their hands on the remake. The game was announced earlier this year, on Tony Hawk’s birthday no less, and since then players have been desperate to get their hands on it.

The remake is bringing back the entire roster from the first two games, meaning everyone from Tony Hawk to Bob Burnquist to Kareem Campbell will feature. However, this time around they’ve been aged up, so their in-game character matches their current ages. When Tony teams up with NICKMERCS though, expect him to show off that the old dog still has some tricks.

As well as the old roster, an entirely new line-up of fresh faced skaters will be joining the party this time around, such as Lizze Aramanto, Leticia Bufoni, Leo Baker, Tyshawn Jones, and Aori Nishimura. Presumably Hawkman will play as himself, but it remains to be seen if NICKMERCS will go for one of the classic stars or a new up-and-comer.

Watch me take on @NICKMERCS this Fri (9/4) from 2:30-5 PM EST as we challenge each other to classic signature moves in Tony Hawk's Pro Skater 1+2 #ad https://t.co/TCf89QK4iO pic.twitter.com/L3ByvfTPhn

Tony Hawk says on his Twitter account he and NICKMERCS will “challenge each other to classic signature moves,” and with 700 new challenges being added to the remakes, there’s a lot for them to sink their teeth into.